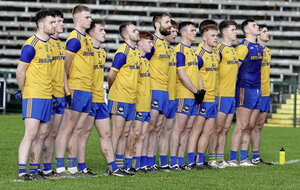 JAMES Ferguson laughs off any potential "triple code star" label, not least because he insists his soccer skills aren't up to much.

Enniskillen Gaels had enough men with both Association and Gaelic football ability to see off Cavan champs Gowna in a penalty shoot-out in the Ulster Club SFC quarter-final, setting up this Saturday evening's semi-final against All-Ireland title-holders Kilcoo of Down.

Ferguson says he would have stepped up to the spot himself, but laughs when asked if he was number six on the shoot-out list: "I would have myself on it but I don't think I'd be let. I haven't the best feet, to be honest. I only really fist the ball."

As regards his soccer experience, he says: "I'd barely even mention that! One of my first or second years out of school I gave the rugby a break for a year. I just played for Enniskillen Athletic, that was in Division Three football [in the Fermanagh & Western League], the first year they were formed. That was enjoyable, just with mates; I think we got promoted to Division Two but it wasn't taken too seriously."

Rugby has been his main game, but he timed his return to the Gaels well, having played underage football with them more than a decade ago. Returning last year, he reached two consecutive Fermanagh Senior Football Championship finals, losing to Derrygonnelly Harps in 2021 before helping beat Erne Gaels this October.

He points to a range of multi-sport talents in the Enniskillen panel, saying: "I don't think I should be singled out, it's probably just more strange that it's the rugby and the Gaelic.

"Maybe I just take notions for things and plenty of other boys could go from sport to sport if they want to, they just don't. We've plenty of boys, the likes of Conor McShea, Ciaran Smith, and Conor Watson, who've won a lot of stuff in two codes, soccer or hurling as well as Gaelic [football]."

The Enniskillen Gaels full-back is modest about his ability with the oval ball too, but he did help his hometown club to success in both the Towns and Junior Cups, in 2019 and 2020 respectively.

Having returned to playing Gaelic football after a decade-long absence last year, this season the 29-year-old helped the Gaels reclaim the Fermanagh SFC crown after an agonising 16-year wait.

Achieving Ulster silverware with an O'Neills ball would be remarkable, though; even reaching the provincial decider would require dethroning reigning All-Ireland Club SFC champions Kilcoo in Saturday night's semi-final in Armagh's Athletic Grounds.

Yet while Ferguson is fully aware that his team will be massive underdogs against the Magpies, he also argues that they can't treat this opportunity as a game without any adverse consequences:

"I agree that it might relax you a bit, and from the outside it looks like a 'free shot' - but no way are we or am I taking this as a free shot.

"You don't want boys to take too much pressure off themselves and think that if you go a few points down 'Ah, well, it's a free crack at them, we're not expected to win', because internally you are confident. You don't want this to be seen as a free crack for yourself because you have to put some pressure on yourself.

"There's everything at stake. There's a chance to get into a final of Ulster. But we're well aware we're underdogs. Obviously, the All-Ireland champions, they're going to be an exceptional team, exceptionally fit, exceptionally strong, well-drilled, they've been together for years. From outside, nothing is expected from us, I'd imagine, but we'll go at it."

The game of Gaelic football changed a fair bit over the 10 years Ferguson was away from it, and not necessarily for the better as far as he is concerned:

"Probably the older style really suited me a bit better when it was 15 on 15, man on man sort of stuff. I got to do a bit of that last year, man-marking, which I enjoyed. You're really looking to beat your opposite man in rugby, and if you keep him quiet you're happy.

"This year we're playing a bit more as part of a system. You can kid yourself into thinking you're doing well in the man on man thing if you do well on your man, essentially; if you keep him scoreless - but you could be messing it up for the rest of your team, chasing him out, etc. It's a wee bit more system-based this year, but I've find I've been able to play it, hopefully."

Kilcoo are the acid test in club football, with the speed and cleverness of their movement, as Ferguson acknowledges:

"It'll be exceptionally difficult, especially for me, I'm not used to that system. They've been together for years as well, so I'm sure they're very, very well set up in comparison to us; we're only really new on the block as such, a lot of young boys."

However, he immediately adds: "But we're confident, we're going into it confident."

Gowna "beat some good teams" and the fact that the Gaels won the Ulster Club Minor tournament on New Year's Day 2017 provides belief to those who played that day, as Ferguson accepts:

"100 per cent. I talked that down for a long time before we'd won the Fermanagh championship, we didn't want them resting on that; there was a lot of focus on that Ulster minor - it's an under 18 competition, really.

"That obviously helps now in terms of playing teams outside Fermanagh and they'll have good experience from that.

"Fermanagh is that small it's nicer playing teams from outside the county because you know everyone so well inside the county. Again, they might talk down the Fermanagh championship but there's less clubs which means you have teams with more county players here compared to the likes of Tyrone.

The likelihood is that Kilcoo will knock them out on Saturday night – but James Ferguson and Eniskillen Gaels will do their best to adapt and try to crack the code to reach another Ulster final themselves.