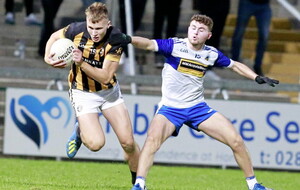 Crossmaglen's Rian O'Neill on the attack against Dromintee in the Armagh SFC quarter-final. Pic Philip Walsh.

BILLING this semi-final as ‘system versus style' may be over-simplifying it, but there's no denying that Maghery have developed a well-honed set-up, quite possibly the best in Armagh football, while Crossmaglen boast the best set of forwards.

Those forwards are capable of carving any side open on their day but in seven of the last eight championship meetings between these familiar foes from opposite ends of the county it has been the system that has come out on top.

With experienced, quality players operating in well-rehearsed roles, Maghery have become a hoodoo team for their south Armagh rivals. They have been able to stifle Crossmaglen's attacking style by cutting out the quick, early ball that their forwards thrive on. They've been able to choke up space when Cross get into attacking situations, prevent them from scoring goals and then punish them concussively on the break when they force turnovers and exploit the space Cross leave in defence.

In their most recent championship meeting, the county final in 2020, Maghery threw a curveball into the Crossmaglen works by employing Aidan Forker as the focal point of their attack. Forker has been transformed into a man-marker at county level but he retains his forwards' instinct and finished with a match-winning 1-3 on the day.

Goals win games and Maghery have found a way to the back of the Crossmaglen net regularly in recent meetings. There have been nine Maghery goals in the past four championship duels and the only game Crossmaglen won, the 2019 semi-final, was the one in which they kept a cleansheet against the Loughshore men.

Repeating that shut-out is the challenge facing the Cross defence tonight and Forker is certain to feature at full-forward for at least part of the game. Whether he's in there or not, Maghery will rotate a targetman - Brian McIlmurray and Ronan Lappin area among the other candidates – in the shadow of the Crossmaglen posts because they feel that their opponents' full-back line is vulnerable.

Cross will expect that, they know Maghery will be physical, well-organised and hard to break down and they know they'll need to be alive to the pace of the likes of Brian Fox on the counter and a bombardment of high balls into their square.

On the flipside, Maghery know that Crossmaglen prefer to play to their footballing principals of 15 against 15 and attack with pace, kicking the ball in accurately to Cian McConville and Jamie Clarke, whose scores could prove vital tonight.

Both sides have injury issues. Oisin O'Neill will be absent for Cross, while Maghery will be without the Lavery brothers, James (retired) and David (injured) and possibly Ciaran Higgins (injured) tonight.

Maghery will miss them but confidence is high and they've already taken out two league winners in this campaign. In the first round, sticking to their gameplan was enough to beat Division 1A champions Armagh Harps and in the second Division 1B winners, and highly-fancied contenders, Ballymacnab.

Meanwhile, Cross conjured up a brilliant last quarter to deny Silverbridge in their first round and then, in extra-time, blew away a Dromintee side that had stayed with them for an hour.

If Cross are to turn the tide they need to show that they've learned from recent results and approach this game with the attitude of underdogs. That means it is horses for courses and they may need to park their football credo and play a more conservative game.

Sweepers are not their way, but Aaron Kernan could adopt that role tonight to add some protection for the full-back line and restrict the influence of Stefan Forker.

Forker has been a reliable operator for Maghery for years and it will take the best efforts of a James Morgan or a Paul Hughes to keep him quiet. That will be an intriguing tussle as will the duel of Stephen Morris and Ben Crealey in midfield and then of course there is the question of who Maghery put on Rian O'Neill.

If Ciaran Higgins is ruled out with injury, Aidan Forker be dispatched to try to keep tabs on the Ulster Footballer of the Year. That battle could decide the war.