Ciaran McCartan was a central figure in Warrenpoint's emergence as championship contenders but, while family and friends prepare for a crack at Down kingpins Kilcoo, the 28-year-old has his focus fixed on another county crown. He speaks to Neil Loughran… 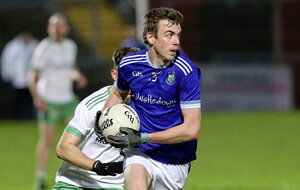 SUNDAY past was met with excitement and trepidation in equal measure in the McCartan house. Two of the crew, Cormac and Niall, were getting ready to make the short trip to Newry for Warrenpoint’s Down semi-final date with Loughinisland.

Normally on big championship days like these - and the ’Point have had a few in recent years – the voice of a third brother would be in the mix too. Urging everybody along, focusing minds on the task ahead.

But, instead of running out on the familiar sod at Pairc Esler, Ciaran McCartan was away down the other end of the country, preparing for a county semi-final of his own – this time in the black and green of Nemo Rangers rather than the blue of Cumann Pheadar Naofa that had been, and remains, an integral part of who he is.

Nemo’s Cork semi-final clash with Ballincollig threw in at 2pm, with Warrenpoint v Loughinisland getting under way an hour later. Yet while it was fairly straightforward for McCartan’s adopted club at Pairc Ui Chaomh - Nemo eventually prevailing with 10 to spare - the same could not be said of the action in Newry.

“As soon as I came out after our game I was glued to the phone,” laughs the 28-year-old.

There, on girlfriend Hannah’s phone, they sat and watched the drama of extra-time and penalties unfold. At times it was almost too much to bear.

Step forward John Boyle – the veteran star further consolidating his legendary status by scoring three penalties and saving one as the ’Point progressed to an October 16 final against All-Ireland kingpins Kilcoo.

Listen hard enough and you would probably have heard the roar coming up the road from the Rebel County.

“What a man! Ah look, there’s plenty’s been said about John at this stage, but he’s obviously a legend in terms of what he’s given to Warrenpoint.

“Unfortunately Gary had to go out… there was probably no better man to go in there and try and get them over the line.”

And while he may not be involved in this year’s journey, McCartan played a major part in Warrenpoint’s emergence as genuine championship contenders.

He was there when the push began, and in 2019 when they reached a first senior county final since 1958, just coming up short in that decider as the Magpies reasserted their Down dominance.

But, even by then, life – and football – was getting complicated.

After graduating from Queen’s in 2017 McCartan was offered a job with international pharmaceutical company Eli Lilly in Cork, and so began years of commuting up and down.

It was never ideal, the almost 500-mile round trip putting paid to any inter-county ambitions he may have harboured after being drafted into the Down panel towards the end of James McCartan’s first stint in charge.

With Warrenpoint on the up, though, McCartan was determined to do all he could.

“At the time we were starting to battle against Kilcoo and the top teams in Down.

“We got beat in the final, got beat in a couple of semi-finals by Kilcoo, but we were knocking on the door. Obviously coming up and down was tough, but it’s my home club… I fully wanted to make it happen.

“As it went on, though, the travelling was getting more difficult, in terms of training and my performance even. I wasn’t getting the best out of myself or giving the best to the team because I couldn’t train during the week, then you were landing down for games.

“That in itself is hard enough.”

When last season came to a close, crunch time was just around the corner.

Having rented up to that point, Hannah was going to be moving down and plans were afoot to buy. At the end of last month they moved into a place of their own. The transfer to Nemo – half-jokingly suggested by a colleague every year - was a no-brainer, but that didn’t make cutting the cord any easier.

“The first while you’re just trying to suss it out, seeing the lay of the land, but it’s been good. I like it here. With Hannah moving down, then buying a house, all that moves it on, so it made sense to try and settle down here a bit as well.

“Obviously I have the brothers playing with Warrenpoint – before you rang there Niall, he’s a doctor up in Antrim, was chatting to me on his way back up the road. I’d be talking to him and Cormac brave and often. And then I’m good pals with a lot of the boys.

“But I made the decision and spoke to Shane at the start of the year… he was very good to me last year with the travelling and everything.

“I’m always interested and always following them, but there is a point where you just have to live with it – though obviously I hope to God they get over the line in the final…”

With the Cork football decider put back until October 30 because Nemo’s opponents - defending champions St Finbarr’s - are also in the hurling final, he won’t be double-booked again and fully intends to be in Pairc Esler on October 16.

Friends and family are already planning to make the return trip a few weeks later, and what a story it would be if all three brothers end up with county crowns to celebrate. There would no happier man than Ciaran McCartan.

“The ’Point have had a great run and, I have to say, it’s been a brilliant experience with Nemo.

“[Manager] Paul O’Donovan is a very good guy, very straightforward guy, so I got involved early on in the pre-season back in January. It was probably my first proper pre-season in five years, so it’s made a big difference conditioning-wise. I feel like I’m as fit as I was going back over the years, so it was great to get that solid base in.

“As for the club itself, there’s history all around you… Billy Morgan is around, Steven O’Brien, all these iconic Cork and Nemo figures. Obviously when you join any new team it takes a while to get to know people, but the lads have been brilliant in getting me involved and making me feel part of the club.

“I’ve enjoyed every bit of it so far.”