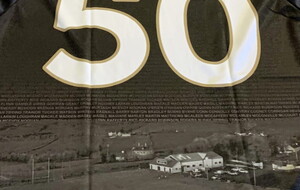 ARE the stars aligning for Lissummon in their 50th anniversary year?

On Sunday, the Lissummon men's senior team meet Derrynoose in the Armagh Junior Football final and, although the Derrynoose players and supporters will say otherwise, you could be forgiven for thinking that Lissummon's name is already on the cup.

Small but rock solid, the rural mid-Armagh club is celebrating the golden anniversary of its most recent incarnation. The Lissummon ladies have already captured the Division Two League Shield this season and what better way to celebrate half-a-century than by bringing some more silverware back to Leish Road, the club's home since 1992.

The name Lissummon comes from the Irish Lios Iomana – Fort of the hurling – and the GAA first established roots in the area in 1908 when the Clann Quinn camogie team was formed. The Ruairi Ogs hurling team followed in 1909 and the first football side – Ireland's Own - took the field in 1925 after Tommy McGailey came to the fore as a driving force in the community.

In 1934, the club had six players lining out for Armagh but hard times followed and, without the numbers to field a team, Lissummon went out of business, was reformed for a few years but then faded away once again.

The arrival of Fr Pat Cassidy as Parish Priest was the catalyst for the formation of the current club. Fr Cassidy was community-driven and, with input from local men including Phelim Quinn and Peter O'Hagan, the decision was taken to make a fresh start.

News of the atrocity in Derry on ‘Bloody Sunday' dominated the airwaves on Sunday, January 30, 1972 when Peter Makem (a future Armagh manager) and Paddy Murtagh hand-delivered the application to restart the club to the country board and the club has become the heartbeat and epicentre of the community since then.

With just 156 registered members, Lissummon natives will argue convincingly that theirs is the smallest club in Ireland. Apart from the club grounds and the chapel a mile or so up the road you could drive through the area without ever knowing you were there.

The primary school closed in 1995 but the Lissummon people have an infectious passion and pride for their club and community that enables them to punch way above their weight.

“The club really is the focal point of our community because we have nothing else,” clubman Niall Murtagh explained.

“We're convinced we're the smallest club in Ireland, we have to be. There are no pubs or shops or anything like that, we have the chapel and the football pitch and the club. When the primary school closed in 1995, local children were scattered to schools all over the place from Poyntzpass to Glenn to Cloughreagh to Camlough…

“So the club is vital, the only reason children know their neighbours down the road is through the football and the community association which runs the youth club over at the football club. Other than that, we'd have nothing.”

COMMUNITY ties are unbreakable. You can take men and women out of Lissummon, but you will NEVER take Lissummon out of them so invariably their children return to their roots to wear the club's green and gold jersey when they come of age.

“You can see that in our line-out now,” says Niall.

“People whose parents are from Lissummon have come back and played for us so they can hang about with the natives and they're considered to be Lissummon people. Our star player now would be a prime example and there's plenty of others. He lived outside Lissummon all his life but his da's from Lissummon and you couldn't call him anything but a Lissummon man. It's a family thing.

“And our lady-folk have brought back some good footballers too. In fact, we're thinking of bringing in a rule that you're not allowed to get involved with anybody unless they can play football!”

The ladies are doing it for themselves too of course. Lissummon were one of the pioneers of the ladies' game in the mid-1980s and teams have flourished in the club since. Lissummon won their most recent title (the intermediate championship) in 2020 with four county regulars in their line-up and this year captured the Division Two shield.

IT hasn't all been plain-sailing since 1972. There were hard times when Lissummon vied with their neighbours Mullabrack and O'Hanlon's Poyntzpass among others for Armagh's wooden spoon.

But, driven on by the pride of their parish, Lissummon reached their first junior final in 1987 and there were unforgettable scenes of celebration when they captured the championship for the first in 2004.

Niall played in midfield that day and Paul McCaffrey, club chairman in the golden jubilee year, lined out at right half-back.

“What a year this has been,” says Paul.

“It's the people, it's the community, that's what makes the club what it is.

“We have had good and bad times, ups and downs, and this year is a very good one. We have had dark hours before this year and at one stage we thought we were heading for an amalgamation. But there's no talk of that now!”

Off the pitch, regular events have punctuated this anniversary year beginning in January with a 24-hour charity spinathon and continuing with a commemorative Mass in February. During the summer the club was overwhelmed by the interest in the Lissummon tour.

“The community spirit is even more noticeable this year,” says Niall.

“You'd see people turning up at matches you wouldn't have seen for a few years and people are far more vocal at the games. Events have been far better attended than they have been for a number of years.

“The anniversary seems to have struck a chord with people. The exhibition we had was a great success and so was the tour of all the old pitches – there's a rake of them around this area and most of them don't look anything like a pitch!”

Club chairman Paul says he's privileged to be at the helm this year and is proud of how the committee, members and the entire community have overwhelmingly supported the club.

“I'm very grateful to everyone,” he says.

“A special word of thanks to all our sponsors, especially our main sponsors Thomas and Paul O'Hagan. There has been a tremendous buzz around the club seeing families, local and from afar, players, coaches and associates past and present coming together.”

On Friday night, Niall Murtagh's excellent book ‘Once Upon a Time in Lissummon' (based to an extent on the painstaking record-keeping of his dad Oliver, also a former Lissummon player) will be officially launched. The imaginative, fact-filled and brilliantly illustrated book tells the Lissummon story from its origins to the present day.

Current and former players and supporters will gather at the club for the launch and to look ahead to Sunday's final and the 50th anniversary celebrations will reach their climax on November 12 with a Gala Ball.

So are the stars aligned? They'll start as underdogs but they're used to that. No favours are given on the football field but win, lose or draw on at the Athletic Grounds Lissummon has so much to celebrate and be proud of.

"Any time our backs are against the wall we are going to come out swinging..." Crossmaglen Rangers prepare for Maghery test in Armagh Championship semi-final