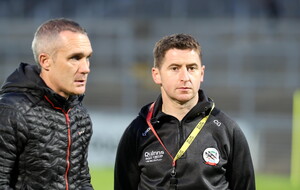 COUNTY finals are now an annual occasion for Kilcoo and they’ll be favourites to retain their Frank O’Hare Cup when they face St Peter’s, Warrenpoint in a fortnight’s time.

The reigning Down, Ulster and All-Ireland champions have been in the last 11 county finals (they’ve won 10) and, although they’re expected to win, complacency will not be a factor in the Magpies’ preparations says joint-manager Conleith Gilligan.

Warrenpoint came within a kick of the ball of causing an upset in the 2019 decider and Gilligan believes that Shane Mulholland’s seasiders have the tools to rip up the script on October 16.

“When things were going against them (in their semi-final against Loughinisland last Sunday) they still had the mettle to knuckle down and get over the line.

“So this is a massive challenge for us again. In most of the games that we go into as favourites the players know that and expect it (the favourites’ tag) and they take it on their shoulders. We prepare for every team equally. I know everybody says that but genuinely they are a group that always looks for what can go wrong and they try and mitigate against it.

“There’s no complacency whether it’s a first round, or a second round… Every game gets the same amount of detail and the final will be no different.

“Warrenpoint turned us over in the championship (2020) a couple of years ago in a second round game and they were a whisker away from turning us over in the final so we’re well enough warned that, if we’re not at our best, we could be in a lot of trouble.”

Losing finalists in 2019, Warrenpoint were semi-finalists in 2018 and 2020. They remain contenders but the losses of Ciaran McCartan (transferred to Nemo Rangers), Ross McGarry (broken jaw) and Ryan McAleenan and Aaron Magee (knee injuries) have obviously dented their hopes.

“They have been there or thereabouts for as long as we have in this job and they’ve come really close,” said Gilligan.

“They have a lot of really good players and you saw the bottle they have – it would have been easy for them to give up. So many things went against them but yet they prevailed so there are a really, really good team and we’ll have to be at our best if we want to turn them over.”

Kilcoo needed to be patient to get past the tactical challenge presented by Mayobridge on Sunday evening. Stephen Poacher’s men did what they set out to do by restricting the Magpies but they managed just one point from play over the hour. A late goal from Eugene Branagan decided the issue.

“That’s how they play,” said Gilligan.

“They’ve been on a good run and they’ve got momentum. After losing to Burren they won three on-the-bounce and they play a very compact running game and when they get that running game going they’re very hard to stop.

“There was a bit of cat-and-mouse in the first half, nobody really wanted to give any quarter and I suppose once we got two-three points in the lead we just couldn’t get away and a two or three-point game is still very dangerous.

“Had we not have got the goal, it probably would have gone down the stretch because they would have pumped high ball in and they still had a goal chance.”