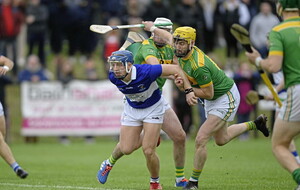 DUNLOY boss Gregory O’Kane has hailed the attitude of his players following their semi-final mauling of St John’s as they aim to make it four-in-a-row against rivals Cushendall in this season’s decider on Sunday October 16.

The defending champions breezed to their fourth consecutive senior final with 22 points to spare, while the Ruairi Ogs stumbled over the line against Loughgiel Shamrocks.

It was O’Kane who ended his club’s eight-year wait for a county championship in 2017 and although they surrendered their hard-earned title the following year, they have owned the Volunteer Cup ever since.

While the Johnnies were desperately disappointing in Sunday’s last four tie, the Cuchullain’s still looked every bit the champions.

“The players lead me,” insisted O’Kane.

“They’re an exceptional bunch, they drive each other on, they’re fantastic athletes. They’re 20-something and they want to play, so they set the standards.

“All I do is accommodate them and give them what they want and ask for, then it’s trusting the process and they go and perform and play.”

Conal Cunning (two), Keelan Molloy, Nigel Elliott and Ronan Molloy all bag majors in Sunday’s emphatic win at Dunsilly while Cushendall won their semi-final with a point to spare.

But O’Kane maintains Cushendall are the “form team” ahead of what is a repeat of the 2019 final.

“Cushendall are a great team and when you look at it they are probably, pound-for-pound, the form team all year, right through the league and the championship," said O'Kane.

"Our league form was a bit patchy, but Cushendall have come through all their games with flying colours, so it’s anybody’s game."