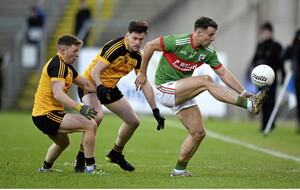 GERARD O'Kane will tog out for Glenullin for tomorrow's Derry Intermediate quarter-final against Limavady Wolfhounds at Celtic Park. The game begins at 3.30pm and, after giving his all for his native club, the former Oak Leaf star will quickly turn his attention to events at Kingspan Breffni where his adopted Ramor United take on Killygarry in the Cavan senior championship semi-finals (throw-in 4pm).

O'Kane splits his week between Virginia and his native sod these days and has been part of John Brady's management team at Ramor this season. Until this weekend there hadn't been a clash but, as championship matters come to a boil in both counties, he's had to wish Ramor luck and take his boots to Celtic Park.

Injuries meant he missed a large chunk of the season with ‘the Glen' but the 37-year-old returned to full fitness a month or so ago. Living just outside Virginia during the week, he makes the 100-mile trip (two and-a-half hours door-to-door) for training with Glenullin and, on alternate nights, brings his know-how to the Ramor set-up.

“I've been there for 90 per cent of the Ramor season,” explains former Queen's University mentor O'Kane.

“Most of the coaching is done during the week so I was able to do that and the games didn't clash so I've been there for nearly all the trainings and 90 per cent of the games. It has worked out ok.”

Drums beat loud to spread the news when a GAA man moves into any area and the services of the 2002 All-Ireland minor-winning captain and National League winner were quickly snapped up when he moved to the football-mad Breffni county.

Reigning county champions Ramor are one of four clubs – Castlerahan, Killinkere and Lavey are the others – within a five-mile radius of his home.

“If somebody new moved into Glenullin, you'd soon hear they were there so when I moved down here the news went around and John Brady asked me to get involved last December,” he explains.

“I told him I was still planning on playing for Glenullin and I wasn't sure how it would work. He said: ‘Look, we've a good team of football men around us but maybe a different eye coming in from the outside mightn't do us any harm'.

“It went from there and it's a different environment for me.

“I'm a bit more detached from it in terms of knowing the players and their families so it was a complete blank canvas. When I first went in, I said to the management team: ‘I would rather you didn't tell me what you think of player A, B or C'. I didn't want to have any preconceptions of them in my head.”

That approach has worked as Ramor have been able to cope with the loss of two of their best scoring forwards - Sean McEvoy and James Brady – and progress to the latter stages of this year's championship.

They were held to a replay by Mullahoran at the quarter-final stage but won the replay convincingly and now take on a Killygarry side that accounted for Kingscourt Stars in a thrilling last eight encounter.

“We played Killygarry in the last group game and it ended in a draw,” O'Kane recalls.

“Both teams would know each other reasonably well but they have since gone on and hit 2-16 against a good Kingscourt side. On the other side of the coin, we've come through two tight games against Mullahoran.

“This generation of Killygarry players haven't been to a final and I've been in that situation with Glenullin so I know they'll be really hungry for it.”

MEANWHILE, in the Derry Intermediate Championship, Glenullin topped Group A with four wins out of four and tomorrow they face a Limavady side that struggled in Group B but beat Slaughtmanus in a Qualifier to reach the knockout stage.

“I played five games in the middle of the league but I haven't played in any of the group championship games because of injury,” O'Kane explained.

“I'm only getting back to myself this last four weeks but if Glenullin have a championship game I'm in the squad for it. All the prep work for Ramor is done Monday-to-Friday anyway and they have enough experience along the line that for me not to be there for that 60 minutes isn't a massive issue.

“You can't split yourself in two and I can't even go to one and then go to the other – it's a complete clash.”

O'Kane turns 38 next week and has been playing senior football for Glenullin for all of 22 years now. It's remarkable commitment from the former Derry wing-back who has no plans to hang up his boots just yet.

“Some boys quit at 32 or 33 and maybe come back after a year out when they realise they missed it but if you stop at 38, I can't see your body allowing you to kick-start it and come back again at 39 or 30. So that's why I'm just keeping going and for me it's about just being about the Glen – it's a reason to be there every weekend.

“We're in transition in that we've a fair few older players still playing but we have a crop of young boys coming through and we want to get them through to try and get back to the top division.

“Limavady beat us in the league about 10 weeks ago so we're going to have to be on our guard, big time.”

Of course O'Kane is hoping for wins in both counties tomorrow but by 6pm his championship journey could have come to an end in Derry and Cavan.

“My season could be over with both sides within three hours,” he says with a hint of trepidation.

“That's the way it works in championship football.”