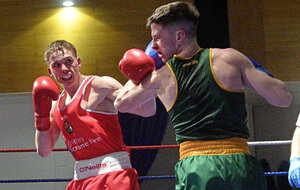 IT was an unexpected twist to go from boxer to baller – but Dominic Bradley is enjoying life outside the ropes as his Swatragh side gears up for tomorrow’s Derry championship rumble with neighbours Slaughtneil.

Just 10 months ago Bradley produced a string of stunning performances to pick up the coveted ‘Best Boxer’ award at the Ulster Elite Championships, and looked in prime position for a spot on the team bound for the Commonwealth Games.

However, the introduction of new weights for those Birmingham Games, and the removal of the lightweight class at which he had triumphed, left Bradley on a sticky wicket – caught between the remaining 57kg and 63.5kg classes, and forced to go one way or the other.

In the end he chose to cut another three kilos from a frame that barely had it to lose and, when the assessments pitted him against eventual Commonwealth gold medallist Jude Gallagher, that weight cut took its toll.

“Obviously I was disappointed that 60 wasn’t going to be there, but I didn’t give up at that,” says the 23-year-old.

“I said I would make the 57, so I gave it a lash… it was the worst weight cut I ever had. It was shocking, but I didn’t want to leave it without giving it a go.

“It took a lot out of me to get down to 57, I knew I didn’t have the same bite in me, and it showed big time in the assessments. Me and Jude did the assessment week together and, in fairness to Jude, he was the man that week and he showed it when he went over to the Commonwealths too.

“He was an animal, you could see it in him.”

That was at the end of March, and while missing out on Birmingham was a bitter blow - especially as he had captained Team NI at the 2017 Commonwealth Youth Games in Barbados – it also presented an opportunity for Bradley to become reacquainted with his first love.

And so, with boxing having forced football onto the backburner for so long, Bradley finally had the chance to give it another crack.

Having recovered from a broken finger picked up hurling for Swatragh, Bradley started in place of Conor McAtamney in the last 16 victory over Bellaghy a fortnight ago after the former Derry player tweaked his hamstring in the warm-up.

From the ring to a different battle ground entirely, he didn’t look out of place.

“The last couple of years I wasn’t really able to play at all, just with the level of commitment to boxing, but the whole way up through underage I would’ve played where I was able.

“Even if I wasn’t playing, though, I was always watching. I was never really too far away from it - whenever you’re from Swatragh you never will be, no matter what else you’re doing.

“Honestly, I’m loving being back at it… it’s like a breath of fresh air. That’s what all my friends are at, and when you’re boxing, you wouldn’t have as much contact with them boys… like, me, Anton [Tohill], Lorcan and Oisin [McWilliams], Tiarnan Walsh, Niall Coyle were all the same year at school, so we’d have played a lot of football together.

“Also, shortly after I knew I wasn’t going to the Commonwealths, I found out I’d got into the PGCE in Coleraine. At that point it was pretty clear what the next year was going to look like for me.

“The course is full on. Where last year, if you were called down to the Irish High Performance in Dublin, you had to go - this year, even if I was called, I wouldn’t be able to do it.

“You just never know what life will throw up, I suppose.”

And as for what the future holds, Bradley is looking no further than tomorrow night in Owenbeg.

“It’s a big challenge, but we’re going into it with nothing to lose.

“As for the boxing, I’m the type of person who wouldn’t be interested in going at it half-assed – I’m either 100 per cent at it, or let it lie until I can go at it 100 per cent again.

“I haven’t made any definite plans or decisions… I’ll just enjoy this now and take it as it comes.”

Brendan Crossan: Tomas McCann and Adam Loughran prove that the marquee forward is not dead