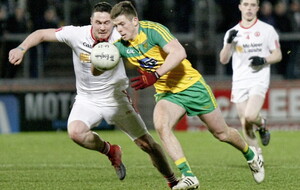 Peter Teague of Dromore in action for Tyrone against Donegal's Eoghan Ban Gallagher.

Peter Teague believes Dromore have the quality and the will to break the mould and become the first club in 17 years to retain the Tyrone SFC crown.

After surviving a first round battle with Killyclogher, they're facing into a quarter-final tie against Omagh, and it's looking extremely promising for the county champions.

Midfielder Teague was a goal-scorer in a 3-9 to 1-10 first round success carved out by a team intent on winning back-to-back O'Neill Cup titles for the first time in the club's history.

"That's the task we have set and we're going to give it our best rattle," said Teague.

Some of the main contenders have already fallen at the first hurdle, but others are still in a race that went to post with the holders not ranked among the favourites.

"To be honest, we have been undermined a wee bit, and written off in a lot of sectors going into this Championship.

"You only have to look at the bookies to see that. But we're using that as motivation, and will continue to use it."

Killyclogher were always chasing the game, but narrowed the gap to two points in the closing stages to set up a gripping finish, during which Dromore displayed experience and game management skills to close out the game and engineer a decisive third goal.

"We knew coming into it that, with the personnel we were missing, it was going to be tough.

"From the county final last year, we were missing six starters, and we knew it was gong to be a tough task facing a Killyclogher team littered with talent, ex-county seniors, current county seniors, young Rafferty and young Potter that won the All-Ireland (U20).

"They're a dangerous outfit and we're just glad to get over the line."

But extra-time in the Healy park curtain-raiser delayed the start by three-quarters of an hour, giving managers Ryan McMenamin and Paul McIver time to readjust and tweak the plan.

"The game before going to extra-time gave us that wee bit more time to digest it, thin it through what way we were going to work it," said Teague.

"Obviously when you're losing an All-Star, an All-Ireland winner like Niall Sludden, it's going to affect any team.

"But we just parked it, we knew we had the personnel on the bench. They had won the Reserve Championship a month ago for us and we knew they were ready to come in and do a job, and we're just thankful for that."

And the O'Neill Cup holders put all their injury setbacks behind them to make a flying start to the game, racing into a five points lead in the opening five minutes to establish a lad that they never lost.

"We learned from last year. Dungannon got two goals and three points against us in the first five minutes last year and we came back on them, they might have been a wee big naïve that day. So we took a bit of learning from that, and didn't want that to happen.

"We nearly did let them back in there at the very end, but thankfully we just kept ahead, I don't think they took the lead at any time."

That was despite the outstanding contribution of former Tyrone attacker, who produced a sparkling performance for Killyclogher, hitting seven points to keep his side in the game.

"We all know, he's one of the, if not the top forward in Tyrone, without doubt. We knew the talent he was going to have, and we tried to nullify him as best as we could, but with men like that, it's about keeping them to as low a score as you can, and we managed to do that, thankfully."