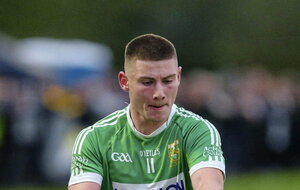 Seamus Walsh, who passed away last month, was one of the driving forces of Aghagallon, a life-long member and former club chairman.

His grandson Eunan played a huge role in seeing the club reach their second consecutive final after their last-gasp win over favourites Portglenone on Sunday evening.

“We lost my Granda a month ago now,” said the Antrim player. “He was an amazing clubman. He was the first man on the pitch a year ago when we beat Portglenone in the semi-finals and no doubt he’ll be a happy man up there - a happy, happy man.”

Former boss Kevin Murray guided Aghagallon to their first senior final in the club’s history last season, but they were swept aside by Creggan Kickhams in the Corrigan Park decider.

Audi Kelly, who took Moy to the All-Ireland Intermediate title in 2018, replaced Murray this year.

They will face Cargin in the October 9 decider after Ronan Devlin’s men also needed extra-time to see off defending champions Creggan.

After a ropey enough league campaign, Aghagallon regrouped for this season’s championship and got some of their key players back, including Sunday night’s goal hero Adam Loughran who spent the summer playing football in America.

“We were really disappointed with the way we performed in last year’s final,” said Walsh, who nailed two crucial points in his side’s extra-time win over Portglenone.

“It was our first-ever final. But this year we’ll leave no stone unturned in the next couple of weeks. Audi and his backroom team have done unbelievable work this year, they’ve put a game-plan in place and we’ve stuck to it and we’ll have a plan ready for Cargin but no doubt they’ll go in as heavy favourites but that suits us down to the ground.”

Just as in last season’s semi-final against Portglenone, Aghagallon looked dead and buried a couple of times during an epic clash at Dunsilly.

A couple of Ruairi McCann goals kept Aghagallon afloat and with no time left on the clock and trailing by two points, Adam Loughran struck gold.

“It was tough and emotional,” Walsh said. “This group never believes we’re out of it. We were four or five points down at one stage but this group never stops believing that we can win these matches - the quality we have, the grit, just everything we have is something special. It’s been brewing with us over the last couple of years.

“With everything that happened last year and to come back and back it up this year... it wasn’t pretty, we didn’t play very well [against Portglenone] but what a special goal at the end.”

Loughran will undoubtedly be a player new Antrim boss Andy McEntee will be looking at as he puts together his 2023 panel. The flying centre forward opted out of last year’s squad but is clearly one of the most exciting talents in the county.

“He’s jinky, he has pace to burn, his hands are first class. He just never gives up. He believes he can take on any man in the county. He’s unbelievable. I’m glad he’s on our team and no-one else’s.”