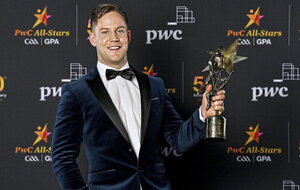 Kieran McGeary of Pomeroy and Tyrone with his PwC GAA/GPA Footballer of the Year award for 2021.

Tyrone football will honour the men who won Allstars, the men who were in the mix, and the men who moulded them all at a special night of celebration in the county's GAA centre at Garvaghey, tomorrow night.

The Red Hands are fourth on the overall list, behind Kerry (148 All-Stars), Dublin (140), and Cork (64). Tyrone won't add to its tally this year, but there's plenty to be proud of over the previous half-century.

From Kevin Teague of Ardboe, nominated in the official scheme's inaugural year of 1971, to Tyrone's first winner, Clonoe's Kevin McCabe in 1980, right up to the eight winners from 15 nominations last year, a host of Red Hand legends will be lauded.

The managers and joint-managers who led them, brought the best out of them, will be applauded too, Jody O'Neill, Tom McKeagney, Art McRory, Donal Donnelly, John Donnelly, Eugene McKenna, Danny Ball, Mickey Harte, Feargal Logan, and Brian Dooher.

The clubs too – top of the tree Moy Tir na nOg, home to 12 All-Stars shared by four men, closely followed by Errigal Ciaran with 10, again won by four individuals. Clann na nGael have six, shared between Dooher and O'Neill.

Ardboe, Augher, Carrickmore, and Coalisland have three All-Stars on their rolls of honour, while Dromore, Edendork, Omagh, and Trillick have two each.

The last-named, the Plunkett's, boast one of Tyrone's four Footballers of the Year, Kieran McGeary last year following in the boot-prints of Peter Canavan (1995), Stephen O'Neill (2005), and Sean Cavanagh (2008).

The clubs who had nominees not fortunate enough to be selected for an Allstar were Aughabrack, Donaghmore, Drumquin, Dungannon, Killeeshil, Killyclogher, Killyman, Moortown, Stewartstown, and Rock.

And that Antrim club who had a nominee? Lamh Dhearg of Hannahstown, for whom former Dungannon Clarke's man Sean McElhatton, from near the Moy, was playing when he helped Tyrone win Ulster in 1973.

Tyrone men have filled every single position on the field in All-Star teams, including six different winners at full-forward, with Canavan winning there on three occasions, in 1995, 1996, and 2003, the last of those as All-Ireland winning captain. 'Peter the Great' also earned All-Stars at right half-forward (1994), centre half-forward (2005), and right corner-forward (2002).

Sean Cavanagh won in two different positions, at midfield three years in a row – 2003-5 – and left half-forward in 2008 and 2013, with his younger brother Colm also winning in two different roles, midfield in 2017 and named at full-back the next year.

Their Moy colleague Philip Jordan is the most decorated Tyrone man in one particular position, with all four of his All-Stars coming at left wing-back. Dooher's three, of course, all came at right half-forward.

Guests of honour will be Eileen and Moira Dunne, daughters of journalist Mick Dunne one of the founders of the All-Stars scheme. The sisters last year published a fabulous history on the first half-century of the All-Stars.

On the subject of history, Tyrone GAA's own scribe Joe Martin will talk about the Red Hands who have lifted those prestigious individual accolades, on a night of memories and inspiration.

Steven McDonnell: No team deserves to pay the penalty in championship football