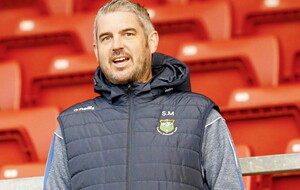 THIS has been a ‘groundhog' championship for Loughinisland who could reach the Down county final by playing just two teams.

Kevin Duffin's men beat Castlewellan in their opening game and followed that up with victory over Warrenpoint. The quarter-final draw saw them paired with Castlewellan again and, after winning that, they're facing Warrenpoint for a second time in the semi-finals.

Having won the first meeting by three points, the 'Island will be warm favourites for Sunday's semi-final but Warrenpoint proved their mettle by winning the latest in the Down championship's series of nail-biters on Monday night. Their game with neighbours Burren went to penalties after a 2-10 to 3-7 stalemate and the seasiders held their nerve to win.

Manager Shane Mulholland makes no bones about it: “The draw that nobody wanted was Kilcoo,” he said.

“I'm sure Mayobridge and Loughinisland felt exactly the same as us. The further Kilcoo go in the competition, the harder they are to beat because they get themselves in order. They are a machine and having another week and another week makes them better and stronger and they've proved over the last decade that they know how to win championships.

“So here we are, a quirk of fate and we play each other again. In one sense some of the planning, studying and analysing the match-ups has already been done but we need to tweak a few things because we got it wrong the first night out.”

Second-time-around meetings can produce contrasting games and results. Early in this championship, Kilcoo put Clonduff to the sword but they needed penalties to win when they met ‘the Yellas' again last Sunday night.

“It's always very difficult for the team that has won the first game to go out the second day and repeat it,” said Mulholland.

“But I have no doubt that Loughinisland will be rubbing their hands and saying: ‘We've already comfortably beat this team' because they massively out-played us that day.”

Warrenpoint led 0-8 to 0-3 at half-time but Loughinisland out-scored them 12-4 in the second half to win the game.

“We just couldn't cope with them,” said Mulholland.]

“So that's a worry for us and I'm sure it must give them a lot of confidence because they know they've already beaten us and they'll be thinking: ‘Why can't we just go and do it again?'”

Pacey forward Oisin Savage impressed in the first meeting as did Declan McClements and former Down minor star Dean McLaughlin. Loughinisland can also rely on the experience of Down veteran Dan Gordon and the athleticism and calm head of current Mourne county regular Johnny Flynn.

Meanwhile, injuries have robbed Warrenpoint – finalists in 2019 when they lost to Kilcoo by a single point – of the services of Ciaran McCartan (transferred to Nemo Rangers), Ross McGarry (broken jaw) and Ryan McAleenan and Aaron Magee (knee injuries) and they are having to patch-up Paddy Murdock between games.

“But every team is the same at this stage of the year. The turnaround is so short that the depth of your bench becomes so important. We've been trying all year to convince the lads that every one of the 28 will be needed and will have a part to play. I already had a couple of calls this morning (Tuesday) from fellas who were disappointed they didn't get on and you have to convince them that their time could come in the semi-final and the final, if we get there.”

Steven McDonnell: No team deserves to pay the penalty in championship football