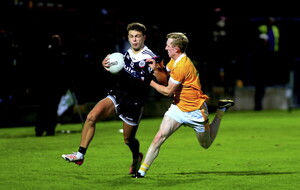 KILCOO joint-manager Conleith Gilligan admits he has no issue with penalties being used to settle championship matches after his side came out on the right side of Sunday night’s shoot-out against Clonduff.

The game was in the balance throughout, with Clonduff seizing the initiative in the first half before the lead exchanged hands in a dramatic final 10 minutes, these familiar foes unable to be separated.

Extra-time followed a similar pattern and when penalties came, it was the All-Ireland champions who progressed, Niall Kane saving Aidan Carr’s sudden death effort to send the Magpies into the semi-final.

It was heartache for the Clonduff veteran as the Kilcoo players celebrated, with the shoot-out reigniting the debate about the rights and wrongs of settling such an important game in this manner when the likes of Cavan were able to facilitate quarter-final replays.

Former Derry forward Gilligan, however, feels there is no perfect solution no matter how a game is decided.

“There’s no easy way to lose. If a free-taker misses a free to lose it, it’s on somebody. Players are big enough now to know it’s part of the game, and part of the excitement for supporters.

“You could see the buzz whenever it happened, everybody filed out of the stand behind the goals. It’s part of the game now, love it or hate it, it’s probably here to stay.”

As they have done many times before, Kilcoo somehow found a way to win when the chips were down, and Gilligan was quick to hail his players’ ability to handle pressure.

“They’ve had lots of highs and lots of lows and been on the rough edge of some defeats in past years as well. It’s was just a case of digging in, never-say-die.

“They did that today and even whenever they were two points down, six or seven minutes to go, they kept hanging on, then it looked like they’d won it in normal time as well.”

Kicking Out: Latest age grade report does nothing for clubs