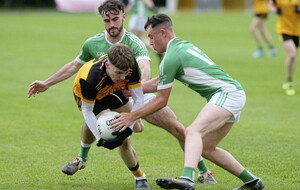 THIS compelling Antrim semi-final clash between Aghagallon and Portglenone will be forever known as the miracle of Dunsilly.

And Adam Loughran was the miracle man of Aghagallon last night. His last-gasp goal finish at the end of extra-time saw the St Mary’s men outfox and break Portglenone’s hearts for the second consecutive year.

How they pulled it off nobody quite knows.

Chasing their first final appearance since 2009, Portglenone held the upper hand for large swathes of last night’s semi-final – but they’ll find it hard to come to terms with the three freakish and decidedly soft goals they conceded that ultimately sealed their fate.

Aghagallon full-forward Ruairi McCann bagged two goals – one towards the end of full-time and another in the first period of extra-time – but last year’s rookie finalists needed another major, and Loughran duly obliged with a thumping effort in the fourth minute of stoppage-time.

In the immediate aftermath, Portglenone protested the length of stoppage-time time match official Sean Laverty played when two minutes was flashed up on the board.

Amid the rain and mayhem, Loughran’s post-match interview was interrupted by Aghagallon goalkeeper Damian O’Hagan who lifted the hero of the hour and ran with him in his arms.

When he was fit to resume the interview, Loughran said: “It was all a bit hectic. I just saw the ball being put in. It went to big [Ruairi] McCann and sure he wins everything and it just sort of fell to me. I turned, saw a gap and kicked it as hard as I could and luckily it went in.”

Even though everyone else had given up on Aghagallon winning this semi-final, Loughran never lost faith.

“It’s championship – anything can happen,” said the former Antrim forward, who spent the summer playing football in America.

The St Mary’s men will make their second consecutive appearance in a senior final after struggling to hit the heights in last season’s decider that saw Creggan Kickhams take the silverware.

Loughran is hoping for a different outcome against Cargin in two weeks’ time.

“We underperformed in last year’s final. I don’t know if we were overwhelmed by it, but Creggan were a great team. I think we’ve got the bit between our teeth this year and we’ll do the best we can."

Asked had he ever witnessed a finish to a game like last night’s, Aghagallon’s number 11 replied: “Only on TV!”