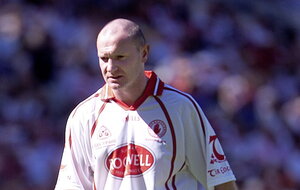 A CHAMPIONSHIP win for Moortown – any Championship win at all – would bring double delight for Chris Lawn.

The former Tyrone star is the proprietor of Lavery's bar, the destination for celebrations among the St Malachy's support.

It's far too early to think about the current crop emulating the achievements of the tremendous team of the early 90s, which reached three Tyrone finals, winning the first of those in 1992.

Yet Lawn insists he'd be absolutely thrilled if the club were to end that long wait in the next few years. Only back up from Intermediate level, the red and whites have probably survived in Division One (the possibility of a play-off remains) but face a tough test against near neighbours Clonoe on Sunday at Edendork.

"I was involved in 2013 whenever we were promoted, I was coaching. The core group is still mostly there, but there's a great influx come through, there's some very impressive young lads and the way they carry themselves, the way they look after themselves, is fantastic. They're a credit to their families and hopefully they'll show that…

"If I ever saw Moortown winning a championship in my lifetime again I would appreciate it more. I know how I felt whenever we won the championship last year, the Intermediate, it was unbelievable, and to get a wee run in Ulster was class."

Having previously worked as a fitter/joiner, first for the legendary Patsy Forbes, then for Jackie McLernon, Lawn will mark a decade as the proprietor of Laverty's next year.

A positive character by nature, he doesn't put on any poor mouth about the testing times for the hospitality industry: "It wasn't too bad, we would look after the whole thing rightly, we're not overly concerned."

Indeed, he hints with a chuckle that business has been more than good on a few recent occasions: "In all fairness, I suppose coming out of lockdown, with our lads winning Intermediate last year and then the ladies, they're having phenomenal success, it's a great 'go-to place'. We're all supporting each other, it's brilliant."

When we spoke, he revealed that memories of their Senior triumph 30 years ago had been on the agenda again: "We were just having that conversation yesterday, believe it or not. It's unbelievable. I only turned 50 there this year, so basically I only turned 20 whenever we won the championship.

"So many of us were very, very young and probably a lot of us would say we underachieved with the club. On the flip of that, there was Carrickmore and Errigal, our three clubs were just coming to our peaks about then, it was just between the three of us at that time."

Carmen remain the top dogs on the Tyrone SFC roll of triumph, with 15, while Errigal Ciaran remain the only club from the O'Neill county to collect the Ulster Club crown.

Yet little Moortown gave them their fill in the early Nineties – and more than they could handle at times.

In some ways, their win in 1992 was unexpected. Moortown hadn't won Tyrone since 1950, hadn't even reached the final since the following year, when Dungannon Clarke's gained revenge for defeat the year before.

Lawn was reminded of Moortown's moment when the Clarke's ended a 64-year wait with a stunning success in 2020.

"We had won three before [1992], but our last had been in the Fifties. I'd look at the achievements of the likes of Trillick or Dungannon in particular, the gaps between their successes, particularly Dungannon's was phenomenal, and we were something similar. We would have thought maybe we should have added on one or two more, but it wasn't to be."

Yet even winning that one in 1992 was rather remarkable. Moortown's run could hardly have been tougher – first up Trillick, champions in 1986 (and 1983 and 1980), finalists in '87. Then Clonoe, the reigning county champions, having denied neighbours Coalisland a three-in-row. Next up, in the semi-finals, were Carrickmore, another coming force, and second on the Tyrone SFC roll of honour. That went to a replay.

After all that, facing Dromore in the final was relatively easy, given that the St Dympna's had never been senior champs, and were in their first decider for a decade.

Having said that, Lawn was a doubt after sustaining an injury in helping his county retain the All-Ireland U21 Football Championship: "Funny enough, Tyrone had won the All-Ireland U21 a couple weeks before and I'd damaged a knee; it was definitely touch and go; I'm still feeling the effects of it since," he says with a laugh.

"I was a bit of a doubt – but, first county final for 40-odd years, it was going to take an awful lot for myself not to be fit for selection. Great work by the medical staff around, I got patched up and thankfully it paid off in the end." Lawn was marking "Big Barry Goodwin, a gentleman but a handful of course – he was 6'5", or something, a good tussle."

Indeed Moortown won fairly comfortably, 2-6 to 0-5, with their goals netted by Brian Quinn and Chris's twin Stephen. Famed as 'Back Lawn' and 'Front Lawn', Stephen was actually both, as Chris points out:

"I'd always says this, he was most certainly a better player than I was. He was versatile, he'd actually played half-back for Tyrone at youth level, Minors and U21. He was one of the fellas that unfortunately missed out on the [Senior] All-Irelands.

"He was definitely a great forward - anytime I ever marked him I couldn't work him out, couldn't handle him. Around here he's quite a legend, a local legend."

So too are all Moortown's `Boys of '92'. Senior success wasn't guaranteed, but it was almost expected from that band of brothers: "We definitely had a tight group, we're all still friends, we had the one common goal.

"Back in the 80s, it wasn't like nowadays - you had a choice maybe, to go...I was never approached to volunteer.

"We were always given that respect, that we were all in for the sport. There was a good group of great friends, we remain that way. Brilliant footballers, the likes of 'Cokey' Quinn [Martin Quinn], big Marty McQuillan, fellas it was great to be around."

The joy at ending a 42-year wait sparked scenes of joy from the final venue of Carrickmore to the loughshore: "We stopped in the Greenvale [in Cookstown] for a bite to eat, then between Lavery's and the Battery, both bars, we had a bit of a shindig for a couple of days anyway. It was fantastic. The older people enjoyed it more than probably we did."

The talented group had been making its mark in the county for a few seasons, Chris recalls: "An Og Sport, U15 tournament was our first success and then onto the U16s, where were very well mentored by Neil Rocks, who sadly passed away in '89 - but he was the bedrock of our success, we always would say that."

Moortown had momentum back then: "Into the late 80s, we had Minor Championships, then U21. We got to the senior final and most of us were under 23 years of age."

As he said, more trophies were expected, and Moortown reached the Tyrone final again in 1993: "Oh God, aye. Errigal beat us by a point, and they went on and won the Ulster Club that year, and were unlucky not to get to an All-Ireland Final, at least, I thought. Lost to Nemo, after a replay…"

The St Malachy's got back to the senior decider in 1995, but lost out to Carrickmore, and never came close to a fifth county crown again.

"So we've been having these conversations, reminiscing…"

The man from Bellaghy

Still, despite the regrets, winning Tyrone was memorable, and Lawn gives great credit to their manager, Chris Brown of Bellaghy.

"The first outside manager we had was Jackie McManus. Then Chris came in for '92. That was his first year. Revolutionised the whole thing, absolutely fantastic; just brought us to that level where we had to be.

"He was probably 10 years ahead of anybody we'd seen from a point of view of organisation, training drills coaching, talking, man-management, all that stuff. That's totally taken for granted now, whereas back in those days, it was 'Do two, three laps there, then pick two teams' - that was your session.

"His organisation, his charisma, his personality….We had a get-together for the 25 years [anniversary] and still he could hold us in the palm of his hand. We have an awful lot of time for him."

Typically, Brown had to lead Moortown into Ulster against the Derry champions, "Lavey, a phenomenal outfit, and they beat us by two points in Ballinascreen. They were the All-Ireland Champions in 1991 and went on to win Ulster again in 1992.

"It was the core of the Derry team, who were fantastic. Many feel we let that one slip and probably had we had a bit more belief in ourselves, we might have pipped them - but their experience and their class just shone through that day."

For all Derry's successes on the Ulster club scene, Lawn still talks up the Tyrone championship – as does an Oak Leaf native of his acquaintance:

"We have a fella, he's moved into the area from Magherafelt, has joined the club, a great GAA man, started going to all the matches, and he says he has never seen anything like the competitive nature of Tyrone football in general.

"People knock Tyrone teams, saying 'Why can't they win the Ulster Club?' They are knocking the pans out of each other week after week, it's so competitive! Whereas these other championships you have your round robins and stuff. Ours is the way it should be."

Apart from Moortown, who's he tipping this year then? Speaking before last night's opener, he commented: "Obviously, Errigal, Carrickmore, Dromore, Trillick – but from what I hear there's a lot of talk about Dungannon – they're shooting the lights out, are top scorers, they've got all their fellas back, are in good form. But who knows? I haven't even mentioned, Omagh, Killyclogher, Clonoe, Coalisland…

"You know the Tyrone championship yourself…"

This year, Moortown would settle for one win – and when the time came for any celebrations, they'll be at Lavery's, of course.

Cases can be made for around half the 16 teams involved in the Tyrone SFC as genuine Championship contenders.

Holders Dromore obviously have to overcome the 'curse', with no team having retained the trophy since Carrickmore did so way back in 2005. Indeed there have been eight different winners over the past deacde, with only Trillick and Omagh having won more than once.

Dromore St Dympna's are clearly a strong side – but they face a stiff test in their opener against League finalists Killyclogher St Mary's tonight (Friday) in Omagh.

The Championship itself threw in last night with another 'toss of a coin' contest, between the surprise 2020 winners, high-scoring Dungannon Clarke's, and the side they defeated in that dramatic penalty shoot-out finale, Trillick St Macartan's – themselves the 2019 champs. The Clarke's won through, 3-8 to 0-11.

Last year's losing finalists, Coalisland Fianna, will fancy their chances again, having last lifted the Cup in 2018, but will take nothing for granted against those former kingpins Carrickmore, not least because the latter won 10 of their 16 league matches, losing only four.

It still astonishes that the St Colmcille's haven't added to their 15 senior crowns since 2005 – and that their great rivals Errigal Ciaran have gone a decade since triumphing themselves, although the Ballygawley men did reach the deciders of 2017 and 2019. They should be too strong for The Moy – but you never know in Tyrone. Two more 'dark horses', Ardboe and Omagh, meet at Pomeroy on Saturday.

Only a fool would put much money on any of the four matches which take place in Healy Park. The most I'll venture is that the title will probably stay west of the Whitebridge Road. Probably.