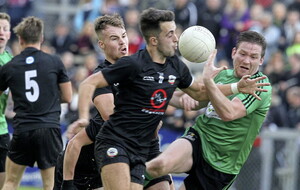 Kevin Duffin in action for Castlewellan against Kilcoo during his playing days. Picture by Philip Walsh

THERE isn't too much detective work required to find out where Kevin Duffin's heart lies. Click into his WhatsApp profile picture and there in all its glory, the evening sun looming above the Mournes in the distance, is the Meadow – Castlewellan's home, and Duffin's too for all his playing days.

The former Down player turns 35 on Sunday. It is only four years since, with knees and hips beginning to malfunction, his club career finished out between the posts, the better part having been spent tearing up and down fields across the county.

Soon he followed in father Paul's coaching footsteps, working alongside his dad at Ballymartin before being offered the opportunity to take the reins at Loughinisland last year alongside Collie McCrickard.

In doing so, he knew the deal. Castlewellan had been promoted to Division One, Loughinisland were already there. By the time the league fixtures came out, fate was ready and waiting.

“We played them in the first match of the league, at the Meadow, and I have to say it was one of the grimmest experiences of my life,” says Duffin, who was part of Down minor side that swept to All-Ireland glory in 2005.

“It was surreal, going back to somewhere you know so well, going into the opposite changing room, trying to beat Castlewellan… look, it wasn't nice, but it's business I suppose. When you take a Division One job it probably comes with the territory, but that doesn't make it any easier.”

The slate was wiped clean when championship rolled around, every club eagerly anticipating the draw. Loughinisland were, of course, paired with Castlewellan, just managing to edge across the line at the death in Darragh Cross.

If Duffin was relieved to get that one out of the way, well, the pair weren't done with each other yet. An unexpected victory over Warrenpoint a fortnight ago sealed Loughinisland's quarter-final spot, while Castlewellan have bounced back from that opening defeat to records wins against Bredagh and Glenn.

Both went into the pot last Monday night, and both came out, side by side again.

“It's unreal, honest to God.

“This will be the fourth time we've played Castlewellan this year… it needs rejigging, to be honest. Kilcoo are playing Clonduff again as well, Warrenpoint and Saul played last weekend after playing earlier in the championship.

“Donal, Callum and Liam McKibben, Cahal Crilly, Barry Travers, Sean Dornan, they're all men you'd have played with and are obviously still very friendly with. Like, Donal and Liam were in my house doing a bit of joinery work on Saturday past and we were talking about the potential draws.

“It's not ideal, it's difficult, but there's nothing we can do about it.”

There was little to separate the pair last time, and tonight's game in Liatroim is unlikely to be much different.

Brendan Grant's men have built momentum after a tough league campaign that ended in relegation, while Loughinisland must now try and replicate the stellar second half showing that downed Warrenpoint in round two.

There is no doubt the 'Island have the potential to mix it with most in Down, even if they have flattered to deceive in years gone by. The challenge for Duffin is to get the best out of what is there – and the fact he has played against some of those now under his charge, and even with in the case of 39-year-old Dan Gordon, presents a unique set of challenges.

“Dan's a perfect example. He's looking at you in the changing room, you're trying to give Dan instruction and Dan was probably one of the best players in Down football in the last couple of decades.

“I left him in peace over Christmas, told him he didn't owe anybody anything and he could come back as and when he felt he was ready to give it 100 per cent, and thankfully he did.

“But Dan and them boys have treated me with the utmost respect, same with the older boys in Ballymartin. That puts things at ease, because it probably is a bit intimidating trying to command that respect, and for them to trust what you're saying.

“The boys showed what they're capable of in that second half against the 'Point – that was reflective of where we're at and what we're able to do. They have bags of potential, and I just want them to do themselves justice.”

Creggan Kickhams are a "class side" as Cargin prepare for semi-final battle: Kevin Doyle