Creggan Kickhams a 'class side' as Cargin prepare for semi-final battle: Kevin Doyle 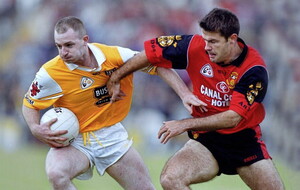 Kevin Doyle in his Antrim days. The Cargin man has been a mainstay of the club's management team

CARGIN selector Kevin Doyle has described arch rivals Creggan Kickhams as a “class side” – but hopes they can turn the tables on them in tomorrow evening’s eagerly anticipated championship semi-final at Dunsilly (5pm).

Last season at the semi-final stages, it was the Kickhams who ended Cargin’s three-year monopoly on the Antrim title. Gerard McNulty’s side went on to lift their first senior championship in 67 years while the defeat was Damian Cassidy’s last game in charge of the Erin’s Own club.

“I think Creggan are a really class side to be honest,” said Doyle, who remains part of the Cargin backroom team, now led by Ronan Devlin.

“They’re physical and they all do their jobs really well. Any team that has the two Johnstons [Ricky and Marty], Tiernan McAteer and the Smalls [Kevin and Conor]- they’re just all very good players. I know Conor McCann is hurt but he’s another fantastic footballer and a real leader.”

Cargin have bitter memories of last season’s semi-final defeat to their neighbours. After defeating them in the 2018 and 2020 deciders, Creggan finally landed a knock-out blow on Cargin at St Enda’s last November in what was a memorable encounter between arguably the two best sides in Antrim.

“I remember we were four points up at half-time, we probably should’ve been five up,” said Doyle, owner of four championship medals.

“And then Creggan got in for a score at the end of the half. Maybe we were a bit complacent, I don’t know, but in the second half we just didn’t perform. It was a tough one to take against Creggan.

“Winning three-in-a-row didn’t help us that much in the end but the boys are really chomping at the bit to get at it. Of course, it’s tough mentally to keep on winning and there's always pressure to win championships at Cargin.

“You think you have everything right but there’s maybe that wee thing in people’s heads. It shouldn’t be the case but that’s the way things are sometimes.

“We’re actually hunting Creggan rather than being hunted this time. That’s probably a cliché at this stage but it’s true.”

Both Cargin and Creggan land in Dunsilly tomorrow approaching their best form of the season.

Ronan Devlin’s men were hugely impressive in how they game-managed their way to a comfortable victory over Lamh Dhearg with a good spread of scores across the team.

On many levels, Creggan were equally impressive in how they handled the waterlogged conditions at St Enda’s 12 days ago in seeing off quarter-final opponents O’Donovan Rossa.

Doyle won championships with Cargin in 1995, ’96, 2000 and 2014, with his last few seasons spent in goal. He was a steady presence beside Cassidy and likewise with Devlin now who has stepped up to the manager’s role in 2022.

“I love it,” said the former Antrim forward. “Sure what else would you be at. You’d only be over watching training anyway, so you might as well get involved.

“Ronan learned an awful lot off Damian but he is his own man too. He does a lot of things differently to Damian. He’s maybe not as vocal in the changing room but he’s excellent with players. It's been good so far and everything is going well.”