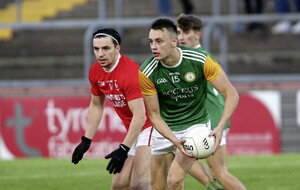 Paul Donaghy (right) of Dungannon Clarke's and Trillick's Lee Brennan met in a dramatic 2020 Tyrone SFC Final, and will be in action again at Healy Park tonight in the Championship opener. Picture Seamus Loughran

Niall Sludden has achieved just about everything the game can offer, with an All-Ireland and an All-Star the most recent additions to his collection of honours.

But he’s chasing another piece of history as Dromore bid to retain the Tyrone SFC title, something the club has never done before.

The O’Neill Cup has visited Gardrum Park on four occasions, in 2007, ’09, 2011, and most recently last season, but back-to-back titles have so far proved to be beyond the St Dympna’s.

It’s 17 years since any team has won successive Tyrone Championship crowns, and nine different clubs have triumphed since Carrickmore did two-in-a-row back in 2005.

“That’s massive, it just shows you the competition and the quality, but the way we’re looking at is that it’s a new challenge, it’s something that we’ve never done within our club as well,” said Sludden.

Dromore’s first defence of the title could scarcely be more difficult.

An opening round against one of the hotly-fancied sides, Killyclogher, means they must peak early and hope that they have enough quality and firepower to see off a major contender at O’Neills Healy Park on Friday evening.

“We know what we’ve got with Killyclogher, and we have had serious battles down through the years, and it’s going to be the same.

“But it’s definitely one game at a time, and at the moment we’re just preparing for the first round against Killyclogher. That’s all you can do, give it your best shot and take it from there.”

Killyclogher pair Mark Bradley and Tiernan McCann, who opted out of the county squad earlier this year, have spearheaded a strong League challenge from their club, which ended with a semi-final win over Errigal Ciaran. The decider has not yet been played.

They also have a couple of talented members of Tyrone’s All-Ireland U20 Championship winning squad in Michael Rafferty and Gavin Potter.

“They’re up there at the top, but the big one is going to be the Championship.

“Killyclogher have a number of boys who have dropped off the Tyrone panel and they’re putting more focus on the club.”

The champions are up against it, Sludden admits, but he can’t wait for the challenge of another intriguing straight knock-out series that never fails to enthrall.

“We’re looking forward to it. any game you get in the Championship is tricky, it’s a dogfight against any team, and that’s why it’s one of the best Championships in Ireland.”

* Trillick and Dungannon will launch the LCC Group Tyrone SFC in this evening’s enticing first round tie at O’Neill’s Healy Park.

It’s a repeat of the historic and dramatic 2020 final which the Clarke’s won in a penalty shoot-out to take their first title in 64 years.

The outcome of that occasion sets this tie against a backdrop of contrasting emotions for the sides, and will no doubt be on the minds of players and supporters in this rematch.

A big crowd is expected at the Omagh venue for the first of eight straight knock-out first round ties, which will all be played off over five consecutive days of sudden death action.

Richie Donnelly is an injury doubt for Trillick, while Dungannon are hoping that midfielder Padraig McNulty will be able to play some part after missing the League campaign due to complications with the healing of a broken arm sustained while playing for Tyrone in the NFL.

Last season, both sides were knocked out of the title race by eventual champions Dromore.

The Clarke’s carry a potent scoring threat, with Paul Donaghy and Patrick Quinn towering twin targets up front, both with an eye not just for the posts, but the net as well, having scored heavily throughout the League.

With Mark McKearney, Dalaigh Jones, and Ciaran Barker providing drive from deep, they will look to prise open the Reds’ defence.

Trillick have strength and vast experience throughout their team, with Mattie Donnelly and Ryan Gray set to heavily influence the central area.

Rory Brennan is their defensive lynchpin, while up front they have the firepower of Lee Brennan, Seanie O’Donnell, and Simon Garrity.

The match, and every other tie at all grades in the Tyrone Championships will be streamed live by Tyrone GAA TV.