Kicking Out: Too many meaningless club games isn't good for a county 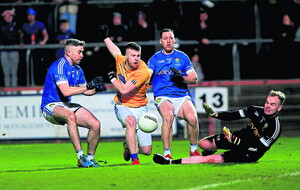 TWO nights from now, the curtain will open on Tyrone’s club championship.

Dungannon were county champions in 2020. They lost their crown at the first hurdle last year, losing an epic extra-time encounter to Dromore.

Under Colm McCullagh, Dromore had previously flattered to deceive. In 2019 they were annihilated by Trillick in the first round, beaten by 17 points.

Trillick have been regarded in many quarters as the best team in Tyrone over the seven years since they surprised everyone to win the championship in 2015. They had played intermediate football the previous season.

Dromore’s win over Dungannon last year confirmed that the O’Neill Cup would not be retained by its holder. You have to go back to Carrickmore’s 2004 and 2005 titles for the last back-to-back successes.

All three of those games could very easily be county finals.

Errigal Ciaran start every year as the bookmakers’ favourites. It is a decade since they last won one.

Each year there is the presumption that they have to win it again some day soon.

Badly-timed injuries to Darragh Canavan haven’t helped and now that Ruairi has broken through, his participation is in grave doubt because of a groin injury.

The uncertainty around their contendership was only emphasised by Killyclogher’s recent one-point win in the league semi-final.

Killyclogher finished top of the league, a point ahead of Trillick. Just five points separated the top five, which also included Carrickmore, Errigal and Dromore.

Omagh sixth, Dungannon, seventh. Coalisland eighth. Nobody in Tyrone would be surprised if any of those eight clubs won this year’s championship.

A winner from outside that group would cause slight tremors but there have been plenty of recent fairytale runs.

Go to their intermediate division. Pomeroy and Edendork, who finished third and fourth behind Eglish and Galbally, have both been narrowly beaten in senior semi-finals in the last few years.

Galbally knocked Pomeroy out in the first round of the intermediate championship at the weekend past.

The point of all this is to emphasise that, for its flaws, Tyrone has the best club structures in the province, if not the country.

Internally, players mightn’t always feel like that’s the case. The late start to the league this year, delayed again because of the U20s, the long summer breaks in past seasons as they waited on the county team to finish up - it has its imperfections.

Winning the league in Tyrone is a big deal. Is there any other county that can say that?

In their absolute refusal to bend on their starred system, they maintain credibility and competitiveness and aggression in their club leagues.

If it has to be delayed or moved around at times so be it, because making it worth winning matters more.

Promotion is there for league and championship winners, with playoffs on top of that. Relegation is through the league too.

The split season and the county team’s early exit combined to ensure county players were available for 12 of their 15 club league games. In a normal year, they’d play at least ten.

Tyrone football hasn’t been the benchmark in Ulster for 25 years simply because of Mickey Harte or their development squads.
The clubs’ refusal to accept their position being diluted leads to friction at times.

It might not always feel like it but the county team benefits long-term from the upholding of the club game’s standards.

In the pursuit of short-term success, other counties have allowed their club structures to be bent out of shape.

Derry’s club season is the ultimate case in point.

The county team has just won its first Ulster title in 24 years. Is it a coincidence that this is the first year ever they’ve played no club league football?

Yet with no promotion or relegation through the leagues and then a group stage championship format that saw nobody eliminated, the weekend past was the first time club players in Derry played a proper competitive game in 2022.

In the long-term, that will have a serious negative impact if it continues.

Derry’s intention is to relegate and promote teams through a reshaped 12-team championship rather than the league in future.

That reduces the league to a series of carnival cup games. Players and spectators had little or no interest. The standard of this year’s games reflected that.

Donegal’s new championship format is a convoluted mess. There is almost no chance of a surprise. It wouldn’t have needed Einstein to tell you the last four in Donegal would be St Eunan’s, Naomh Conaill, Gaoth Dobhair and Kilcar.

They took the format from Cavan, which qualifies eight out of their top 12, but the key difference is that theirs is an unpredictable championship.

Picking the last four in Cavan is a whole different story. For unpredictability, they give Tyrone a run for it.

Armagh have gone back to straight knockout which enhances their championship, but their lack of access to players through the leagues leaves clubs feeling like it’s a bit of a raw deal.

County players were available for bits of club league action in Antrim, but their move away from only the top two qualifying from their hurling group stage and having two groups of three teams from which the top two qualify in football has weakened the edges in their championship this year too.

Club leagues have been watered down to nothing and group stage formats are doing the same to championships.

The long-term competitiveness of the club scene will have a big say in the strength of a county team.

Short-sightedness has set in.

In Tyrone, the clubs simply would not accept it. There would be all-out war if the county board tried to impose any more than five starred games in a 15-game season.

Because of the access they get to county men during the leagues, they love and protect the knockout format of their championships because that’s what a championship is.

Others have kowtowed too easily and allowed their entire year to be reduced to virtually nothing.

Donegal, Derry, Cavan, Armagh, they’ll all come and go in waves, but Tyrone have been the one constant since the mid-90s.

They are All-Ireland U20 champions and back-to-back Ulster minor winners. They aren’t going anywhere at senior level.

Kicking Out: Too many meaningless club games isn't good for a county