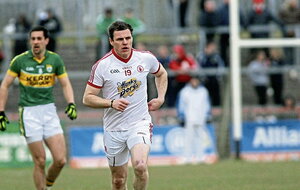 The treble All-Ireland winner is confident that the Red Hands will quickly put this year’s collapse behind them and reclaim their place among Gaelic football’s elite.

“There’s definitely talent in Tyrone, the club scene is fantastic, with some top class footballers. It’s just about getting those boys, and gelling them in, and going at it again,” he said.

Tyrone’s defence of the All-Ireland title disintegrated in spectacular fashion with sound beatings by Ulster rivals Derry and Armagh.

A combination of systems failure and loss of form by key players contributed to the Championship implosion.

“They’ll be disappointed with the way they performed individually, never mind collectively," acknowledged the Carrickmore clubman. “But they have Brian (Dooher) and Feargal (Logan) and an experienced back-room team to get the boys’ heads right again and drive on again.”

A post-Christmas squad holiday to Florida meant the Red Hands were playing catch-up in rushed preparations for the new season, and Gormley believes they never managed to make up the ground lost in those early weeks.

Now with a seven-month chasm between their All-Ireland exit back in early June and the new season, rest and reflection will stimulate appetites for what 2023 holds in store.

“So they’ll get refreshed now, enjoy the club championship, see what happens for them there and hopefully get new talent in to freshen the thing up and go on again.

“They’re up there at that top table at the minute, and long may it continue, but don’t get me wrong, they have serious work to do, without a doubt, but they are capable of doing it.

Gormley’s own reflections stoke empathy and hope. Like the current players, he was a member of Tyrone teams that failed to retain the Sam Maguire Cup, but came again to triumph in subsequent seasons.

“We were caught on the hop a few times, and could have got to more finals around that time, I thought. But that’s just the way it is, other teams are out to beat you and they up the ante that wee bit extra to beat you. That’s how it proved for Tyrone this year, but they can regroup and go again.”

The Carrickmore man has already scratched that itch by winning back-to-back All-Irelands with the Tyrone Over-40s team.

He captained the Red Hand veterans to victory over Dublin in last weekend’s Masters final, and will be part of the team that attempts to complete three-in-a-row next year.

“It’s a brilliant competition with brilliant teams playing in it. it’s brilliant to be involved in it and long may it continue.”

Cavan Gaels to provide Gowna with biggest test yet