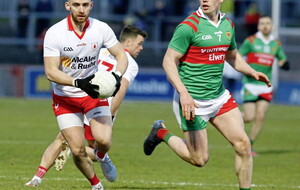 Tyrone's PÃ¡draig Hampsey and Mayo's Stephen Coen in action during the GAA Allianz Football League Division One Round six betweem Tyrone and Mayo on 03-19-2022 at the at Healy Park Omagh.. Pic Philip Walsh.

Tyrone captain Padraig Hampsey says the players will need to work at winning back the faith of their supporters in 2023.

The Red Hands' defence of the All-Ireland title went horribly wrong this year, with early provincial defeat to Derry followed by a first round exit in the Qualifiers at the hands of Armagh.

But the Coalisland clubman is certain that with a lengthy break behind them, batteries recharged, the Red Hands will be a major force again next year.

“We know we didn't perform to our best ability this year, and we have got the get the Tyrone people behind us again, and get the thing going again.

“But with the lads coming back with that bit of hunger, a bit of fight again for next year, we'll hopefully push on, because we have a young enough squad there,” he said.

“It was a strange one, getting a bit of time off throughout the summer. I got to go away on holiday, which was the first time in six or seven years.”

Tyrone's spectacular decline from the heights of 2021 shocked the GAA public, and the players themselves are struggling to understand the reasons behind their failure to mount a sturdy defence of the county's fourth All-Ireland title.

“Things just didn't get going this year. It's hard to put a finger on it, but the Ulster Championship is such a tough competition.

“It's tough to get going, you're always coming up against big opposition.”

It was two of the oldest and fiercest Red Hand rivals that delivered the killer blows, making the demise of the provincial and All-Ireland champions all the more painful.

Derry's raid on Healy Park for an Ulster Championship shock was followed by an Armagh tour de force as they swept to Qualifier success at the Athletic Grounds.

“Any day you put on a Tyrone jersey, you go out to do the team proud and the jersey proud.

“But Derry have had a great year and they did well to win the Ulster Championship, and Armagh, beating us in the Qualifiers, we were really disappointed getting beat that day in the Athletic Grounds,” said Hampsey.

But there's a resolve among the squad members to get back to the levels to which they soared a year ago.

“We'll get the batteries recharged in around the winter months and get back to Garvaghey and get training hard, because we know that we have a point to prove now.”

An injection of fresh talent from the All-Ireland winning U20 team brings an exciting new dimension, with Ruairi Canavan, Michael McGleenan, Niall Devlin and Steve Donaghy adding to the depth of a squad that was depleted this season by the departure of several players.

“Those U20s, we saw how good they were in the U20 Championship this year, and they got their opportunity to step up to seniors.

“We know the ability that those lads have, and they'll push on.

“They're real good lads, even off the pitch, they look after themselves and they will be giving it a big push this year coming in. Hopefully those lads can push on.”

Hampsey can't wait for the challenge that 2023 will bring, not least the opportunity to take on a Kerry team being tipped as the game's dominant force for the next few seasons.

“You saw how good Kerry were this year. They're such a good team, and they have some serious talent and players coming through there.

“I would say over the next few years they will be a team that will be hard to stop.

“The All-Ireland is such a tough competition, and there are a lot of teams that on their day can beat anybody.

“But we're looking forward to getting back in the winter months, getting the miles in the legs and getting going.”