From Shaun Mahoney in Mayobridge 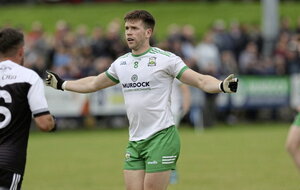 BURREN are the Down Division One chmpions after seeing off Kilcoo in a feisty encounter, which finished with 12-players each.

The St Mary’s side were deserving winners after hitting 1-7 before Kilcoo replied in a 40-minute spell where the Magpies failed to register a score.

A mass brawl 10 minutes from the end, spoiled what was a decent contest and only heats things up ahead of the senior club championship, which gets under way next week.

Burren made a late change with talisman Donal O’Hare being a late withdrawal and the impressive Odhran Murdock coming in to take his place. Burren boss Jim McCorry is hoping to have O’Hare back for the crunch championship clash against Mayobridge.

Played in the big pitch at St Patrick’s Park Mayobridge it was the Magpies who dominated the opening quarter. Burren took a while to get adjusted and then the St Mary’s men took control of the last quarter.

Shealan Johnston tapped over a mark within the first minute and Sean Og McCusker fired over a beauty from tight angle. With four minutes gone the Magpies were three points in front thanks to Ryan McEvoy’s converted free, and there was a huge cheer when new Down boss Conor Laverty chipped over with ten minutes played. Conleith Gilligan’s were on a roll but that was as good as it got.

Ryan Trainor stroked over Burren’s reply two minutes later before Niall Toner popped up with a great point. Burren had moved Kevin McKernan to the edge of the square, with Trainor going wide and Liam Kerr and Danny Magill making leggy runs forward. Odhran Murdock and Ryan Magill were cleaning up around midfield.

Kilcoo defended in packs and were furious each time referee Conor Curran blew them up for conceding a free.

The Magpies thought they had the ball in the net when Justin Clarke pulled the trigger but Burren 'keeper Callum Grant, who had a great game, got a firm hand to the ball and Ronan McGrath was perfectly placed to clear the danger on the goal-line.

Conall McGovern’s black card on 25 minutes meant Burren finished the half with 14 men but you couldn’t tell by the way McCorry’s men had assumed control. Trainor steered over a fine free and then Niall Toner’s 45 sailed over the bar to level the score (0-4 to 0-4) at the break.

Burren stayed in control at the start of the second half with Kerr and Trainor tagging on two quick points to take the lead for the first time.

McCorry’s men were on top and Kevin McKernan placed his pass in front of Shay McArdle and the bounce needed his slightest touch to guide it over Niall Kane and into the net for a great goal with 45 minutes played.

Then the game lost control as a massive brawl and then several smaller brawls ensued, with punches thrown. Kilcoo’s Jerome and Ryan Johnston had only come off the bench and were sent off along with Sean Og McCusker, while Burren’s trio of Odhran Murdock, Danny and Ryan Magill also saw red, which meant the game finished 12-a-side.

Ryan McEvoy tapped over Kilcoo’s first point in over 40 minutes as the Magpies tried to close the gap. But Burren weren’t going to lie down and Kerr, Trainor and Paddy McCarthy kept the scoreboard ticking over.

Ryan McEvoy found the target again but the contest was over long before the final whistle. It’s Burren who are league winners and it is Clonduff who face a wounded Kilcoo in the club championship next Friday night.