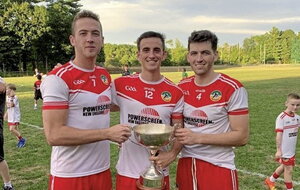 IT was just after midnight, Sunday creeping into Monday, when Brenda McAnespie tweeted from her home in Aughnacloy, having just spent the best part of the evening following fare beneath a Massachusetts sky.

The Boston SFC final is always a big deal to the few thousands patrons who pile through the gates at the Irish Cultural Centre in Canton but, like so much of this summer’s Stateside action, a growing contingent had tuned in from the other side of the pond.

After a tight, tense tussle Aidan McAnespie’s eventually pulled away from Donegal Boston to claim the crown – the first of their two goals coming from the right boot of homegrown player, Eoin Gormley.

Back at home, the McAnespie clan let out a collective yelp as the ball rattled the net, the significance of the score mattering every bit as much thousands of miles away.

“Congrats to @AidanMcAnespie Boston on their brilliant win,” tweeted Farney legend Brenda, a pivotal figure in the Monaghan side that dominated ladies’ football during the 1990s.

“Such an honour to have Aidan’s name remembered. Delighted for everyone involved, special mention to Eoin Gormley on his brilliant performance, his dad Dermot being Aidan’s first cousin.”

The club is named after Brenda’s brother-in-law Aidan, who was killed by the British Army near a border checkpoint on February 21, 1988 – the family’s fight for justice continuing 34 years on.

Aidan McAnespie’s, Boston was formed in the 24-year-old’s honour in 1995, and has been one of the big success stories of the North American GAA scene.

The ongoing family connection has only served to embolden that link, with Dermot Gormley manager as the McAnespie’s swept to three championship titles in-a-row between 2005 and 2007.

The Carrickmore man remains involved behind the scenes, a proud father as he watched Eoin carry on that association en route to being crowned kings of Boston again. It is one the 20-year-old is proud to uphold.

“I have a decent knowledge of it, I know [his uncle] Brian [Gormley] is involved with the case still… you could see with a lot of our clubmen yesterday, how much it meant to them to get this win. McAnespie’s is a big community here.

“We knew people back home were watching too, that helped us get over the line too. There are big enough rivalries out here too, and this one is probably the biggest.”

McAnespie’s – managed by Offaly man Alan Comerford - ended up winning 2-11 to 0-10 to claim a first title since 2011, with Gormley’s first half goal helping edge them ahead at half-time.

It had been nip and tuck up until then, with former Dublin star Paul Mannion firing over three points as Donegal Boston remained in contention. Gormley’s goal came after referee James Molloy penalised goalkeeper Hugh Boyle for taking too long from a kick-out, McAnespie’s won the hop ball and Gormley – one of three American-born players alongside brothers Owen and Steven Ward - made no mistake when the ball landed in his arms.

“I had to finish that one off,” said Eoin, whose mother Deirdre hails from Monaghan – “that’s where he gets the football skills”, smiles Brenda McAnespie.

“It was pretty cagey but it opened up and we eventually got going a little bit. We were poor in the first half with turnovers.

“I got a few goals against them the first time so I was fancying myself before the game anyway… I thought I had a good chance of getting another one.”

Donegal ace Jamie Brennan landed a second goal in the 49th minute to stretch the lead out to six and, with captain Robbie Croft in inspirational form, there would be no stopping the McAnespie’s.

Although basketball is his main sport, Gaelic football has always been close to the heart of the Boston College student, and Sunday’s victory gives McAnespie’s the opportunity to go even further at the North American Championships this weekend.

Gormley had been planning a trip to Ireland, but that has been put on the long finger for now ahead of what promises to be a festival of football at Chicago’s Gaelic Park.

“If we lost I was going to be going there on Wednesday, but we won so we have Chicago now, our first game is Saturday against Young Ireland’s from Philadelphia so we’ll take it from there and see how we go.

“Hopefully we can keep it going.”

And, no matter what happens, McAnespie’s won’t be short of support back home.

“With Dermot having been involved before, and now Eoin,” says Brenda McAnespie, “it’s nice for the family to have that connection still there now.”