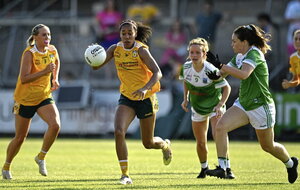 Lara Dahunsi of Antrim in action against Sarah Britton of Fermanagh during the TG4 All-Ireland Ladies JFC Final replay. Photo by Oliver McVeigh/Sportsfile

ANTRIM proved much too strong for Fermanagh in Saturday's All-Ireland Junior Championship Final replay to claim the West County Hotel Cup for the first time in 10 years.

The Ulster champions might have needed a late equaliser two weeks ago to earn this replay but there was only going to be one winner in this commanding display by the Saffrons.

They certainly brought their shooting boots to Armagh's Athletic Grounds and were going to make sure they did not leave this one behind. Grainne McLaughlin put on an exhibition in shooting as she finished with eight points, including five from play, each one better than the previous while captain and player-of-the-match Cathy Carey hit 2-1 with a goal in each half. In all, Antrim had six different players on the scoresheet while Fermanagh relied heavily on Eimear Smyth for their scores, the Derrygonnelly player finishing with seven points. Where Blaithin Bogue was instrumental in Croke Park two weeks ago, she was heavily curtailed this time around leaving Smyth to try and get the scores, while Antrim had players like McLaughlin, Caitlin Taggart and Bronagh Devlin to take over the scoring duties from Orlaith Prenter and Maria O'Neill.

It was a frantic start to the game in blistering hot conditions with Smyth and McLaughlin trading frees and with just over five minutes gone came the game's first goal when Fermanagh captain Molly McGloin lost possession to Lara Dahunsi and her speculative effort dropped in over the head of Erne goalkeeper Roisin Gleeson.

Antrim looked dangerous as they attacked at pace and Maria O'Neill almost got in for a second goal but she was denied with Gleeson who got injured in the process before corner back Eimear Keenan cleared the loose ball from the goalmouth. The game was stopped with Gleeson requiring attention and in that time referee Lorraine O'Sullivan stretched out her arms to indicate a penalty to Antrim with no apparent obvious reason. However, given the opportunity, Carey stepped up and duly despatched past Gleeson to open up a five point gap, 2-1 to 0-2 with six minutes gone.

Once more Smyth responded with her and Fermanagh's third point but an Orlaith Prenter free gave Antrim a 2-2 to 0-3 lead at the water break.

Fermanagh grabbed back-to-back points through Smyth and a super effort from Erin Tierney, who was a late replacement in the starting line-up, to narrow the gap back to just three, but they could not close it any further.

Antrim wiped out those points with scores fromTaggart, McLaughlin and Devlin as they punished Fermanagh for losing possession to raced ahead 2-5 to 0-5 by the 19th minute. That was their last point of the half but their defence was coming out on top and Fermanagh, with Smyth taking her tally to five for the first half, managed just one more point, to leave it 2-5 to 0-6 at the break

Antrim reeled off four points in the first 10 minutes of the second half to edge closer to victory, McLaughlin with a point either side of Taggart and Carey scores to open up a nine point gap, 2-9 to 0-6.

It took Fermanagh until the 43rd minute to register their first score of the second half thanks to a free from Smyth but Taggart, with her third of the day, restored Antrim's nine point advantage and it was 2-10 to 0-7 at the second water break.

Bogue finally got on the scoreboard in the 47th minute for Fermanagh, who after working really hard for their scores saw Antrim up attack the other end and cancel it out.

McLaughlin, Prenter and McLaughlin with two more points opened up an 12 point lead, 2-13 to 0-8, and with seven minutes remaining, it was their captain, Carey, who made sure of the victory with a well taken goal, blasting past Gleeson, after a pinpoint pass from Devlin.

Cadhla Bogue pointed for Fermanagh but once again Antrim replied and once more it was through McLaughlin (free) as she brought her tally to an impressive eight points. Fermanagh kept going to the end with Blaithin Bogue (free) and Smyth raising white flags late on but this was to be Antrim's day and they ran out worthy winners.