In Profile: Mickey Graham knows nothing else but Gaelic football 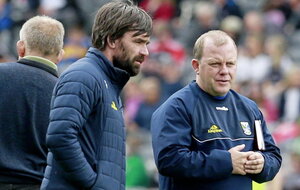 WHEN he was first announced as Cavan manager, in September 2018, Mickey Graham sat down for an hour-long interview with the local WeAreCavan podcast.

The discussion meandered through his playing days, with club, school and county, and on to how he got involved in management.

“I remember JJ Reilly asking me to go up and help with the club minors. He felt that with a Cavan player, the lads might listen.

“That’s when I first started to get involved… I said to myself that when I was finished playing football, it was something I’d like to do to keep myself involved because I know nothing else only Gaelic football.”

The last line is instructive. Graham is a football fanatic and the family are steeped in it; his father Mickey snr is a well-known steward and his younger brothers Andy and Paul have won Ulster minor and U21 medals.

In the Cavan town in which he grew up in the 1980s, football still quickened the pulse, despite Cavan Gaels’ decline at the time. In the late 1970s, the club won three senior championships and reached an Ulster final but they reached just one Cavan final in the ’80s.

Graham played on a minor team that reached the St Paul’s tournament final in 1991 but it would be seven years before they returned to the senior decider and 2001 before they’d win it.

Graham was captain and an Ulster U21 and senior medallist by the time they ended that 23-year wait. After the drought, the dam burst – the Gaels would go on to win eight of the next 10 titles.

Gaels’ glory was based on the talent factory the aforementioned Reilly, and others, oversaw at Terry Coyle Park. As far back as 1995, Graham was aware that the club had tapped into a rich seam of talent, alive to the latent potential where there is good coaching and planning.

“All these lads were coming through and I was thinking to myself, ‘I can’t wait for these lads to get to senior level’,” he said.

Cavan Gaels lost the 1998 final to a Mullahoran side who were winning their first title since 1963. The final passed Graham by and he swore afterwards that it would never happen again, that “any time you’d get to a final, you’d make the most of it”.

But that was it. At 32, he played in his last decider. By then, coaching had taken over. Having seen

first-hand in his own club how success could be mined, how serial losers could be transformed into perennial winners, he got to work.

The way he tells it, it was happenstance but it is unlikely his path was headed in any other direction when that random call came from Butlersbridge, a junior club just five minutes outside Cavan town, ahead of the 2004 season.

Junior championship success with the ’Bridge came in a replay; two years later, he guided another local club, Drumalee, to an intermediate championship, also after a replay.

This management lark seemed easy – but it isn’t.

A spell with Ballyhaise, a strong intermediate side, yielded no trophies. He took the Cavan minors – a team including Gearoid McKiernan and Niall Murray – and while they improved, running Tyrone close in a 2008 Ulster semi-final, the breakthrough didn’t come.

He later took over his own club’s senior team and Clonguish in Longford but his meteoric early progress seemed to have stalled. But Graham kept on keeping on.

With Mullinalaghta, it all clicked. The north Longford club, who share a parish with Cavan’s Gowna, stormed to three successive county titles and then, unthinkably, a Leinster final win over Kilmacud Crokes. One of the smaller clubs in one of the smallest counties beating arguably the biggest, in the biggest; it was the stuff of Hollywood scripts and catapulted Graham on to the ‘A List’.

Graham, who has had John Denning riding shotgun all the way as selector, even found himself on the Late Late Show. The Cavan town lad had come a long way and there was more to follow.

By then, Graham had been appointed as senior team manager in the Brefffni county. In a 2010 interview with this writer, he was asked about the job.

“That’s my ambition,” he replied, without hesitation.

“I know I’m not quite ready for it yet, I’m still young, I’ve still got a bit to learn… Who knows what the future holds but to get a chance to manage Cavan would be a big hope of mine, definitely.”

He grabbed that chance in 2019. While Cavan were relegated from Division One, wins over Monaghan (a first victory over top flight opposition in 14 years) and Armagh secured a first Ulster final spot since 2001.

The following year, they went one better with that glorious four-game Ulster run, culminating in the lockdown final win over Donegal in Armagh.

Tears spilled at the Athletic Grounds and it seemed that this Cavan team were here to stay.

One might imagine an Anglo-Celt Cup would buy unlimited time for any Cavan manager and, yes, while Graham has retained the support of the vast majority of fans and the county board, the intervening period has been disappointing.

An unprecedented relegation to Division Four in 2021 was followed by the meek surrendering of the Ulster title to Tyrone.

This year, Cavan won the basement division but not altogether convincingly. A big Ulster SFC victory over Antrim was followed by a decent performance against Donegal in Clones, subsequently tarnished by Tír Chonaill toils.

Cavan went into the Tailteann Cup as hot favourites but after bright opening wins, they lost their form against Sligo and were downright poor in the final against Westmeath.

After the game, Graham spoke of moving on, of what an honour it had been to play for and manage Cavan. His four-year term up, speculation was rife that he would step aside, and his ongoing links to Mullinalaghta meant he was naturally courted by Longford.

The month-long ‘will he-won’t he?’ ended on Monday when a short statement confirmed he would be re-appointed for two further years in his native Breffni county.

The news has been well received but there is no doubt both team and manager are at a crossroads.

While Graham has given youth its fling, the squad is certainly not young. They’ll start 2023 in Division Three, a winnable target, but he’ll ultimately be judged on the Championship. To that end, progress has been made since he took over but more is needed.

Tough, yes, but that’s the game and it’s a challenge he’ll take meet head-first. As he said himself, he knows nothing else.