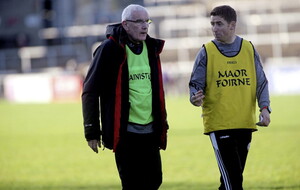 Conleith Gilligan with Mickey Moran when they were together in Kilcoo

CONLEITH Gilligan feels the Down senior footballers will experience an upturn in fortunes following the appointment of Kilcoo’s Conor Laverty as their new manager and that his relative youth will also be a positive.

At 36, Laverty is probably in the last throes of his playing career this year – but in managerial terms he’s young to be taking over an inter-county senior team.

Laverty was the county board’s choice to succeed the outgoing James McCartan, confirmed on Monday evening, and he will continue to manage the U20s next season with whom he won a provincial title in 2021.

“Conor’s played against all these players he’s going to be coaching and I think that actually gives him an advantage because sometimes younger players look at older managers and maybe think they don’t get them.

“It used to be you’d train on Tuesday and Thursday and play a league match on a Sunday. That’s not the case anymore. Players are professional in everything they do – they’re doing stuff four, five, six times a week to be at the top level, and Conor has done that himself.

“He understands the demands of county football and there’s no doubt he’ll help the players to get there. I actually think his age might be an advantage because he knows the players so well.”

Laverty will be assisted by U20 duo Marty Clarke and Declan Morgan and is expected to add a third member to his senior backroom team soon.

Gilligan and Richie Thorton have stayed on in Kilcoo after Mickey Moran stepped down after guiding the Down champions to an All-Ireland title in February.

They face Burren in a league final next Wednesday before sizing up neighbours Clonduff in the club championship with Laverty still very much a part of the Kilcoo panel.

“Conor kept me informed and where he was [with the Down job],” Gilligan said.

“He wanted to play this season and he’s been going really well. He owes Kilcoo nothing, he’s represented Down at every level and he’s been in the game such a long time. He knows what kind of environment he needs to help the Down team.

“Of course, there are no guarantees in football but he’s been around the block long enough to know when the set-up is good and I think he’ll put together a top class team whenever he takes the Down hot-seat.”

With Down languishing in Division Three, many will now expect them to make a decent fist of promotion in 2023 but Gilligan says beyond that, things will take time.

“Things do take time,” said the Ballinderry man, “especially the strength and conditioning side of things.

“In Derry, Rory Gallagher is in his third year. Yes, you’ll have the most bounce in your first year but players’ conditioning and getting them to the right level and where they need to be takes time.

“When you’re in Division Two and Three you’re not playing against the standard of Division One, so Derry obviously jumped a few steps and did it really well. They’ve shown what is doable.

“I think Down have enough good players there, they have the experience of winning the U20 Ulster title and you put that with the very talented forwards in Down… So there is a really good mix of youth and experience. I think Down will be a match for anybody and there’s nothing to say they won’t get promoted in their first year.

“I think their fortunes are going to take a turn for the good.”

Laverty will be Down’s fifth manager in eight years, which perhaps typifies the senior footballers’ decline since James McCartan’s first spell in charge ended in 2014.

Jim McCorry, the late Eamonn Burns, Paddy Tally and McCartan again have held the reins over the past eight years, with the Mournemen flickering briefly on the Championship stage under Burns in 2017.

“I think it’s a very natural progression for Conor to step in, a young manager, to try and get Down out of Division Three,” Gilligan added.

“I’m delighted for him… Conor always makes really good decisions on the field. More often than not, he will sacrifice his own game for what’s right for other people.

“That’s a very rare trait, especially for forwards because a forward’s role is generally to get scores and headlines.

“But Conor doesn’t care about that stuff. It’s whatever is right for the team. He has just a great influence around the place and among the young players at Kilcoo.

“He’s walked the walked and whenever he asks players to sacrifice they know he’s done it and that gives him the best opportunity among what is a very talented group of players in Down.”