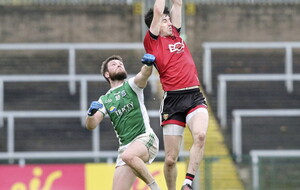 James Guinness in action for Down in the Ulster Senior Football Championship quarter-final against Fermanagh in 2020. Picture Margaret McLaughlin.

JAMES Guinness had the posts in his sights and was pulling the trigger to take a shot when a routine challenge shattered his right knee and dramatically ended his season.

After the appointment of Conor Laverty (his former coach at Trinity College Dublin) as Down manager, the dentist from the Carryduff club had hoped to return to county football next year.

Unfortunately that won’t happen now but Guinness – whose brother Daniel will hope to be involved with the county – is determined to regain his fitness and return to the fray with club and then, he hopes, the Mournemen.

Guinness’s right knee was dislocated in the tackle. Initially he didn’t think the injury was season-threatening but it emerged that damage had been done to his anterior cruciate and the lateral collateral ligament. Grafts from both hamstrings were needed to repair his injuries.

That operation is behind him but, when he’s off his crutches, he’ll have another. Earlier in the season he broke the scaphoid bone in his wrist in training. Despite the injury he played on but he’ll need a graft from his hip to repair the damage.

“It was an innocuous-enough incident,” he says as he recalls how his knee injury occurred.

“I was taking a shot and I was pulled back from behind a wee bit and then the defender came in and blocked me – his hip came in against my shin and my knee went sideways.

“I didn’t think I’d done as much damage, it was more the shock of the impact. I was able to get on my feet but as the days went by I knew it was serious – I couldn’t straighten my knee, it was buckling.”

Scans showed the extent of the damage and was told he’d need an operation as soon as possible. He had surgery a week ago and reckons it’ll be 12 months before he’s fully fit again.

Sport is one thing but his livelihood will suffer too. Guinness works in Dublin but can’t drive for six weeks and, when he gets the wrist operation, that will mean another six-to-eight weeks out of work.

“All that is a bit more important that the football,” he says.

“But I’m lucky that I moved home (to Belfast) this year and I was hoping to get a job at home in the new year so I could be closer to everything. At least it (the injury) happened when I’m living at home and I can get a bit of help.”

He had opted out of the county scene in 2022 because of his daily commute to Dublin. He is hoping to get a job at a dental practice closer to home and, with a good club championship behind him, would have hoped to force his way into new Down manager Laverty’s plans. He won’t be fully fit until August next year, so the 2023 club championship is his focus.

“I’ll see what I can do in that championship and if things go well and I’m asked back into the Down panel there’s every possibility that that would be a good option,” he says.

“There are plenty of people who have come through this, and much worse, before so once I get back on my feet I’ll be itching to get back as soon as possible.”

He expects Down’s prospects to be brighter by the time he’s challenging to get back in the squad.

“I know Daniel is delighted to see ‘Lav’ (Conor Laverty) get in,” he says.

“I worked with him for five years at Trinity so I know him pretty well and I think it’s a really good appointment. He’s a good man for the job.

“James (McCartan) had a tough job coming in so late but at least they’ve got Conor in early and he knows Down football as well, if not better, as anyone so he’ll get the best out of what’s there in Down.

“Kilcoo didn’t get through Down easily but they went on and won an All-Ireland so there’s plenty of good footballers in the county and if he gets them together Conor has the tools to make things happen again in Down.”