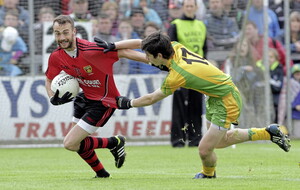 Conor Laverty during his Down days

PAUL Devlin believes his Kilcoo team-mate and new Down manager Conor Laverty can get “all the best players in the county into the same changing room” and start raising the bar again in the Mourne County.

When the Down County Board broke the news of the new senior manager's identity on Monday night, Laverty was training with the Kilcoo senior team.

“We just trained as normal,” said Devlin, “but there was an appreciation of Conor getting the Down job.

“It’s not too often a Kilcoo man gets to manage his own county – in fact, I think he might be the first Kilcoo man. After that, we focused quite quickly on what’s ahead of us at Kilcoo.”

Given the low ebb Down football finds itself on the national stage, Devlin feels they are “ready to respond” to get the county up the leagues and competitive on the Championship stage again.

Last season, they failed to win a League or Championship game in what was a fractious period. James McCartan only took the job at short notice and encountered some disciplinary issues on the eve of their Ulster Championship outing against Monaghan.

Devlin said: “I think Down are more or less ready to respond because whenever you look at Down club football you see how competitive and strong it is.

“If you ask any Kilcoo player what the toughest competition we’ve come through, everyone will say the Down championship - and you just wonder why it can’t be transferred onto the county team.

“Maybe this is the answer. Maybe Conor knows a bit more about individuals. I think he can bring success to Down.

“He’ll definitely bring a professionalism to it and will leave no stone unturned. He will think of every possibility and every match-up, he’ll make sure his team is prepared.

“He’s a deep thinker about the game. He’ll always be asking you questions and you’re thinking: ‘Why is he asking me that for?’ But he’s always thinking about scenarios and thinking ahead. He is football mad. You just saw how he had the Down U20s that year they won Ulster [2021]. Nobody gave them a chance.”

Laverty will continue as Down U20 manager with assistants Marty Clarke and Declan Morgan also doubling up.

He will also have picked up quite a bit of knowledge from his stint with the Monaghan footballers in 2020 as well as learning off former Kilcoo manager Mickey Moran who bowed out after the club’s historic All-Ireland triumph back in February.

“Conor has been coaching now over 17-18 years – at inter-county, schools, club and U20s and he was involved with the St Michael’s, Enniskillen team that won Hogan a couple of years ago.

“He knows a lot about the youth coming through in Down. He develops good relationships with people and seems to get the best out of boys because it’s not too often you’d have a player who is still playing and managing.

“He’s still wearing the club jersey and he could be playing against boys he could be managing in the future.”

Laverty had ruled himself out of contention to replace the outgoing Paddy Tally last year but with an All-Ireland club title banked and the new split season coming into effect, the timing to take the job on is undoubtedly better ahead of the 2023 season.

Devlin hopes there will be a strong Kilcoo contingent in the new Down squad – but the 32-year-old also acknowledged that there is a considerable step-up from club to county.

“People know how good a team we are in Kilcoo but the inter-county stage is another step up; there are different things that come into it in terms of physicality, pace, height…

“So the Kilcoo boys who feel they are county standard should make themselves available because they have that winning mentality and that could definitely help.”

Devlin added: “You look at Derry. Their club football was flying but they never really transferred that to the county until this year and they seemed to buy into a mindset and a target, and everybody put their shoulder to the wheel.

“If Conor can get the best players in Down into the same changing room and get them all singing off the same hymn sheet, there’s no reason why they can’t go on a journey as well. It’s just getting them to buy into what he wants to do and I’m sure there’ll be a lot of boys putting their hand up to make themselves available.”