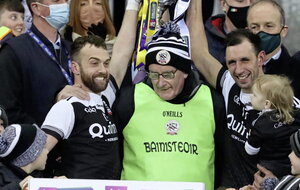 CONOR Laverty will be charged with leading the Down senior footballers out of the doldrums after being appointed as their new manager last night.

Laverty succeeds James McCartan who stepped down a fortnight ago after just one year in charge.

The Kilcoo man will continue to hold the U20 managerial reins and has retained the services of Marty Clarke and Declan Morgan who’ve been assisting Laverty at the underage grade for the last couple of seasons.

In a statement last night, the Down County Board said Laverty would add another member to his senior backroom team at a later date and that Darragh O’Hanlon and Conor Gilmore would continue in their respective U20 roles.

Laverty was linked to the Down job last year but he ruled himself out of contention due to his playing commitments with Kilcoo and their pursuit to land an All-Ireland title.

Having fulfilled that dream in February with a dramatic win over Kilmacud Crokes in the final, the timing to take on the Down job is undoubtedly better ahead of the 2023 inter-county season.

When Paddy Tally stepped down as manager at the end of the 2021 season, Laverty was heavily involved in trying to find a successor.

He revealed in that he’d held talks with Donegal’s All-Ireland winning manager Jim McGuinness about taking over in the Mourne County but the deal fell through at the 11th hour and McCartan reluctantly returned to the post for a second time.

It was not unexpected Down dropped into Division Three – drawing one match and losing six – before being beaten by Monaghan in the first round of the Ulster Championship and later bowing out to Cavan in the inaugural Tailteann Cup.

McCartan had threatened to walk out on the eve of the Monaghan game due to disciplinary problems within the squad.

Laverty faces a mammoth task in reversing Down’s fortunes after a pretty barren period on the national stage.

Having guided the Down U20’s to a dramatic provincial title in 2021, Laverty has also gained plenty of knowledge as a football development officer in Trinity College, working alongside Meath great Sean Boylan for a period and with the Monaghan senior footballers in 2020.

He’s never shied away from the fact that he wants to coach at the highest level.

Speaking to The Irish News in January of this year, he said he would juggle his playing and coaching commitments for as long as possible.

“I enjoy coaching but, as many great players and managers have said and given me good advice on it, nothing beats playing, Laverty said.

Laverty trained with his Kilcoo team-mates last night and looks certain to remain a playing member of the squad for the upcoming league final against Burren and the club championship which gets underway in a few weeks' time.

Last night’s county board statement paid tribute to Laverty’s on-field exploits with both club and county.

“Conor played at all levels for his county, featuring in the All-Ireland final of 2010 and the Ulster decider two years later.

“He earned an Allstar nomination for his exploits in the red and black in 2012 and went on to captain Down in 2015.

“He is one of our most decorated club footballers, winning 10 county championships with Kilcoo, and he was joint captain when they won the 2019 and 2020 Ulster titles before leading his club to the ultimate honour in Croke Park in February this year.”

Meanwhile, Mickey Graham has agreed to stay on with the Cavan footballers for another two seasons, subject to ratification. In Fermanagh, it's no surprise that Kieran Donnelly will remain at the helm and Joe Baldwin as senior hurling manager for a fourth consecutive year.