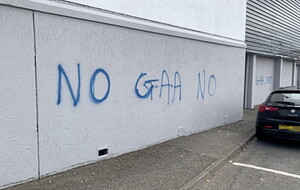 ONE of the best things to come out of the pandemic was the celebrated birth of East Belfast GAC.

Nobody, least of all the founding members of the club, could have expected the tsunami of interest that followed their first tweet, posted May 31, 2020, seeking members.

The significance of the tweet wasn’t lost on many: a GAA club in east Belfast, historically unionist heartland, but whose religious-ethnic demography has shifted in more recent years.

There was huge media interest in the new club's story. Sceptics felt that it would be a fly-by-night venture that would crash and burn.

Others were more optimistic.

I attended the club's first competitive game in senior football on July 17 2020. It was a rainy, warm night in Magheralin against hosts, St Michael's.

The club's kit was black and amber, colours synonymous with the east's famous Harland & Wolff cranes that perpetually scorch the city skyline.

Keir speaks with a soft English accent. His parents were born in India.

His surname is from his great grandfather who was born in former Czechoslovakia. Kier was named after Keir Hardie, the founder of the English Labour Party.

He was substituted in his first game but won the player of the year award at the end of his and the club's first season.

Keir was one of hundreds of people who took up the tweet's open invitation.

Since being bossed by St Michael's on that rainy night, when the GAA came tentatively back into the light during COVID, the club has morphed in size.

They now have roughly 650 members, four men's football teams, 120 female footballers while the hurling and camogie adult sections have around 90 players each.

They started an underage section too (U5 to U11).

The children's first field trip will be to Croke Park for a special event later this month.

A bus would pick them up every Saturday morning and the kids began learning about toe-tapping the ball and experiencing that gorgeous sound when ash and stitched leather collide.

“We had an Arabic translator for newly arrived Syrian families, but when kids are kicking football about they don't need to speak the same language... it's just happening in front of your eyes that they are integrating,” said Ciara.

Everybody understands what East Belfast GAC is about.

David McGreevy, one of the founding members, summed it up best.

“[We want] to provide opportunities for different communities so they get to know each other. It would be great to see young kids from all backgrounds all mixing and making friends with each other and growing up playing sport together.”

But, judging by some threatening social media posts, they don’t want East Belfast GAC to achieve this noble objective – certainly not through the medium of Gaelic Games.

They want this human co-operative on the east side to fail and don’t want Gaelic Games about the place. It would seem they want integration on their own narrow terms.

In their utopia, it’s hard to know where the celebration of Irish history and culture would sit and won't countenance narratives of this bloody island that contrasts sharply from theirs.

Theirs looks and feels like an outmoded cultural monolith that wriggles and winces at the first inklings of diversity.

The same happened during lockdown when an anti-GAA sign was erected at the entrance of the Grove Playing Fields in north Belfast when it was noted that some kids and their parents had the temerity to be toe-tapping and hand-passing the ball to kill a couple of hours of an afternoon.

Or: ‘You can come to our park, but you can only partake in certain sports.’

In asking for a pitch to play their games, East Belfast GAC shone an unforgiving light on the lack of council facilities in the city that can accommodate Gaelic Games.

To their credit, the city council came back to the club and offered them a pitch at Victoria Park – a site where several soccer pitches had remained unused for a couple of years.

A Gaelic pitch has already been lined out and grass cut at Victoria Park.

East Belfast officials are under the impression that council work at the pitch has been paused as they await the delivery of goalposts – not because of some outrage that has prompted unionist reps and council officers to take stock of some insecure, ideological bombast on social media.

Melting pots are an integral element of a progressive, rights-based society. East Belfast GAC is way out in front.

No-one should feel threatened by the volunteering service they’re offering to all walks of life and abilities east of the city.

In an interview last year with Keir Herink, East Belfast’s inaugural player of the year, he said: “I know there have been ‘events’ that have happened. It’ll take time but hopefully it’ll end in a case where it’s just a Gaelic club down the road.”

And let's hope the club's latest venture - the 'GAA-for-all' Gaelic football team takes flight and the kids feel air under their wings.