The numbers have tended to settle the Allstar goalkeeping debate, but the 2022 argument is the least straightforward of recent seasons. Cahair O'Kane studied the footage and broke down the battle between All-Ireland winning Kerry goalkeeper Shane Ryan and Armagh's Ethan Rafferty… 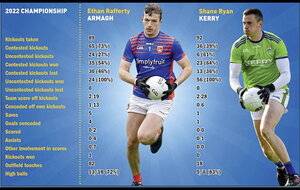 The stats from the 2022 championship. Graphic: Kevin Farrell

DO you go for tradition and stability, or do you go for ingenuity and anarchy?

In the past four seasons, the Allstars committee has gotten the decision exactly right on the goalkeeping position. Rory Beggan (2018), Stephen Cluxton (2019), Raymond Galligan (2020) and Niall Morgan (2021) were all backed up by the numbers.

This year, the numbers don’t settle it.

You can throw statistics at any argument you want to make, but statistics and lies can be far-out relations.

Ryan hasn’t always had the credit he’s deserved in recent seasons, but this year he’s taken away all the uncertainty over his position and become a very definite number one for Jack O’Connor.

He got through the championship conceding just a single goal. His performance in the final was excellent.

Where he brought an oasis of calm to the Kerry defence, Ethan Rafferty brought chaos that sometimes bordered on calamity to the way Armagh played football.

Yet it was so brilliantly effective and he was so heavily involved in the team’s whole system of play that it leaves you having to make a judgement call on what you value more.

You could argue Shane Ryan out of the gong quicker than you can argue Rafferty out of it. That comes down to Cluxton syndrome.

The Dublin goalkeeper was the undisputed king of his generation and although he walked off with six Allstars, there were plenty who felt that was slim enough return.

But in recent years particularly, as scrutiny around the position has grown, he’s missed out on account of basically having had nothing to do.

A lot of the time with Cluxton, teams were so scared of how he could hurt them by going long that they stood off him. They were powerless to break Dublin’s defence and left him no shots to save. Even a flawless year wouldn’t be enough because others got to be judged on duress.

The stats from the 2022 championship. Graphic: Kevin Farrell

The Munster championship was a write-off. Shane Ryan lost one kickout but between Cork and Limerick, they only contested three in total. How do you judge that?

When Ryan did come under pressure in the All-Ireland series he was very good. All things considered, Kerry lost just 13 kickouts in the whole championship. Crucially, the opposition scored just 0-6 off him.

Rafferty’s numbers are very different. His 54 per cent return from contested kickouts doesn’t quite match Ryan’s 64 per cent, but Rafferty was put under far greater pressure.

Throw in that he was a first-time goalkeeper and twice met with the Donegal wall that has dominated all of Ulster football in the last decade, the Grange man’s output is very respectable.

Yet Donegal’s win in Ulster was largely founded on their domination of his kick in the first half. In the qualifier, they did the same for 25 minutes, scoring three times off his first five restarts.

In that game and against Galway, he was so sharp to come for high balls. Anything that hung at all, he hurtled out after it. One man’s bravery is another man’s recklessness. He stopped a certain goal with a brilliant interception ahead of Damien Comer early in the quarter-final, yet was lucky not to concede goals to the same man and Michael Murphy when he came for high balls and didn’t get near them, only to see the fisted efforts go wide.

Ethan Rafferty made more mistakes than Shane Ryan, but what Armagh gained from not fearing the risks he took was every bit as significant.

It was his raking 70-yard delivery to Rian O’Neill that opened the door on the stoppage time goal that helped force another 20 minutes. He touched the ball almost five times more often than Shane Ryan did. It’s natural that he’d make more mistakes, simply from doing more.

Rafferty found his feet to an extent in Croke Park but wasn’t flawless either. His kickout was picked off in extra-time just after Armagh had gone ahead, giving Galway back the ball. They used it to work their own goal for Cillian McDaid.

He was also lucky that he wasn’t black carded against both Galway and Tyrone, only avoiding the concession of a goal on the latter because Connaire Mackin got back on the line so brilliantly to intercept.

But for all the flaws, it’s hard to imagine Armagh would have gotten as far as they did without him. Kieran McGeeney’s decision was questioned and criticised on the back of their defeat in Ballybofey, but it was all vindicated over the weeks that followed.

The unnatural Rafferty almost made five saves this summer, to Shane Ryan’s one. The Kerry goalkeeper faced just two shots, both against Dublin. He got his legs to James McCarthy’s but could get nothing on Cormac Costello’s.

Rafferty was fierce unlucky that two of the four goals he conceded came from the rebounds of saves he’d made, against Tyrone and the first goal against Galway.

Where Shane Ryan excelled was late in tight games. The tireless movement of his defenders was incredible and did a lot of the work for him, but Ryan kept a seriously cool head. Come the last quarter of games, Kerry went central and broke to the wings. Ryan only had to prod it into space but Dublin and Galway both put a serious squeeze on. His decision making and delivery were top-drawer.

The numbers do favour Ethan Rafferty, but for once they won’t win the argument on their own.

This one’s a judgement call, but the Armagh man will have the right to feel disappointed if he’s not in.

Danny Hughes: The trials of being an inter-county manager have never been more demanding