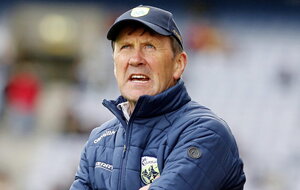 IT wouldn’t be Dublin versus Kerry if there weren’t more sub-plots than The Sopranos rumbling around below the surface and, despite the relatively low-key build-up, the 2022 instalment in this long-running saga is no different.

The ground has shifted significantly since their last Championship duel beneath September skies three years ago but, if Jack O’Connor’s comments after the Mayo game are anything to go by, still waters run deep in the Kingdom, no matter the passage of time.

After the disastrous defeats to Cork and Tyrone that would ultimately define Peter Keane’s reign, calling upon O’Connor was akin to casting up the Bat signal or summoning the A-Team, back to finish out one more job.

The three-time All-Ireland winner could easily have said little, or nothing, about the Dubs as the dust settled on quarter-final victory a fortnight ago. But he couldn’t help but roll a little grenade under the table; a timely reminder of what is powering the Kerry engine this year.

“The bottom line here is these Kerry players have been yearning to get a cut at the Dubs from as far back as three years ago,” said O’Connor, eyes narrowed beneath his baseball cap.

“They lost an All-Ireland out there that they would feel they could have won.”

The Sky Blue juggernaut was at the peak of its powers then. Eamonn Fitzmaurice, who had finished up with Kerry the year previous having tried and failed to curtail the Dubs’ dominance, has spoken of how only the perfect performance would be good enough.

That is no longer the case, with the frailties in the current Dublin team exposed across the last 12 months unlike at any other point in the past decade.

Jim Gavin walked away weeks after completing the six in-a-row, perhaps aware that this group was suddenly staring down the other side of the hill. The conveyor belt of underage talent that propelled them to the top of the tree had started to stutter, and even surveying their squad now, there is promise and potential but nowhere near the punch of three years ago.

Since then, Stephen Cluxton – the man who occupied Kerry thoughts more than any other – has slipped off the scene. Evan Comerford is excellent, but the Kingdom will go all out to make tomorrow as uncomfortable an experience as possible.

Of the rest, the dynamic Jack McCaffrey left and never came back. The same too of Paul Mannion, while experienced heads like Philly McMahon, Michael Darragh Macauley, Diarmuid Connolly, Cian O’Sullivan and Kevin McManamon have all exited the stage.

Kerry’s last Championship victory over Dublin came 13 years ago, the day of the ‘startled earwigs’ that sowed the seeds of revolution in the capital. They haven’t had a better shot at ending that sorry sequence than now.

And yet both still have questions to answer coming into this game - with doubts surrounding their two brightest stars prompting hedging of bets on a grand old scale until the details of selection are revealed once and for all.

The absence of James McCarthy and Con O’Callaghan from the routine victory over Cork last day has prompted a nervy few weeks for Dubs supporters. Dessie Farrell offered no explanation after – was their unavailability a rope-a-dope to leave Kerry fretting for a fortnight?

Given how rudderless the Rebels have looked at times this year, and how unlikely they were to pull off an upset in any circumstances, this is not out of the question.

McCarthy’s influence should never be understated, but O’Callaghan is a player Dublin simply cannot afford to be without in a game of this magnitude.

Having missed a League campaign that ended in relegation from Division One, his return ignited Dublin’s year. All of sudden they looked sure-footed, their attacking play more structured and dangerous, the Leinster final demolition job on Kildare leading many to revise their opinions on where Sam was headed.

The Kingdom, meanwhile, have conceded just two goals in 14 competitive games this year and, while a toothless Mayo never really threatened to alter that figure, they created – and spurned – enough chances for points, particularly in the third quarter, to give serious cause for concern.

If O’Callaghan does start, it will be interesting to see how Dublin go about the job. Do they push up on the floating Tadhg Morley and test the mettle of this Kerry rearguard? And would the threat of the Cuala powerhouse be enough to curtail the forward bursts of Tom O’Sullivan, who took Cillian O’Connor for three points from play the last day?

O’Connor must also decide whether to allow Jack Barry to renew acquaintances with Brian Fenton in the middle, after injury forced him out against Mayo, while dog-of-war John Small will almost certainly trail Sean O’Shea.

And then there’s David Clifford. For all Dublin’s fears for O’Callaghan, there are lingering concerns about the Fossa phenomenon too. Having missed the Munster final canter beyond Limerick, he trod awkwardly on the ball minutes into the Mayo quarter-final, jarring his ankle in the process.

Clifford still bagged the game’s decisive goal just before half-time, and was only withdrawn three minutes from the end, so he is expected to start. If he does, you would have to fear for Michael Fitzsimons after a less than convincing year, with Brian Howard likely to drop back in front of the full-back line to provide much-needed protection.

If O’Callaghan and McCarthy aren’t fit to play, making any kind of case for the Dubs becomes increasingly difficult. And even if they do, Kerry’s physicality around the middle and their pace on the counter threaten to pose problems Dublin just don’t have the answer to right now.

The Kingdom by two.