"He was my driving force, always behind me and supporting me" - Armagh's Aoife Lennon on how she struggled to cope with the loss of her father and how it inspired hr to help others 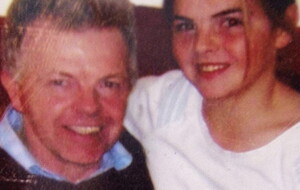 IT was all about control. Touring with her national team was the hardest time, she would carry her own food to escape the dreaded carbohydrates she was so desperate to avoid.

Aoife Lennon used sport as a coping mechanism after she lost her father to suicide at just 13. It offered her an opportunity to do what she loved and not have to face up to the pain that never dissipated.

Ten years later, she eventually began to face up to the repercussions. Having lost 10kg in a short space of time, she fell ill on a holiday in New Zealand and soon realised she was suffering from an eating disorder.

The Armagh footballer returned home to receive treatment and only then could her journey begin.

“My eating disorder started from football, I perceived a comment to be true and began the journey of wanting to lose weight and got into extreme exercise,” said Lennon.

“I wanted to control every element of my life, it became that everything had to be perfect because this was a way of keeping me safe from feeling the pain or the emotions.

“Instead of sitting with the emotions, I wanted to run away so I used exercise, food and body image to numb the pain thinking an image or looking a certain way would make me happy.”

Lennon was first introduced to sport when she was just six, with her father, John, inspiring her to play ladies football and soccer.

She went on to represent Armagh Harps and Armagh City in the respective games before she wore Armagh colours at inter-county level, while she also played for Newry City and Northern Ireland.

From a sporting perspective, one of her proudest achievements was captaining her side in the Champions League against massive teams like Benfica and PK-35.

“We started off in Division Four and won every league and then won the Premiership to get to the Champions League,” said Lennon.

“It was just something you couldn’t write, we achieved so much. We lost one game the whole time. That’s your dream, as a captain, to walk out and be the leader in the Champions League.”

Lennon was living the dream on the field with Northern Ireland at the time too but she was suffering all the while.

In April 2006, the day before she was first selected to play for her Northern Ireland, Lennon learned that her father had passed away.

“My dad was massive into sport and coached a lot of teams. I went to every match with him, it was just me and him really.

“I am an only girl and we were always together, he brought me everywhere. He basically coached me and developed me into a player.

“Before I lost him, that week I was finding out that I was selected for Northern Ireland. He was my driving force, always behind me and supporting me.”

For the years following his passing, Lennon focused on her various sporting exploits to avoid the questions that lingered inside her head.

She was thriving at soccer and ladies football but deep down the feeling of hurt and anger gnawed away.

“I didn’t really know a lot about depression and I had no idea what had happened my dad,” said Lennon.

“We just had to go back to living a life that seemed to be normal. Football was my coping mechanism and it helped me deal with the loss of my dad.

“He brought me up and I was just lucky that I was talented at a sport. I could avoid, then, feeling the emotions because I didn’t know how to feel, I didn’t know what to do with them.

“It was just my way to cope. I loved sport so I was lucky that I had sport to go to.

Lennon was 23 when she decided it was time for a break, she wanted to travel and explore the world while she still could, and she headed for New Zealand looking for a new outlook.

Sport was put on hold and although she took up yoga, she couldn’t find peace of mind.

“I was so scared of putting on weight that it took away all of my performance, I was too focused and driven to look a certain way rather than performing that I played in complete fear,” said Lennon.

“When I was travelling in New Zealand I was questioning who I was. I didn’t know who I really was without a football. It was the first time I started to actually stop and slow down and be with myself.

“A lot of emotions came up and I had to start to question then what was my life about and who was I. I learned a lot in that time and then as time went on in New Zealand I started to get weaker and sicker and just felt completely burnt out and so tired and exhausted.

“I didn’t want to play sport, I had no interest in any of it. The more time went on I actually kept thinking I was putting on weight because I wasn’t exercising. It was a distorted image.

“Whenever it came to it, I was so weak and I just knew something wasn’t right. So when I went to the doctor and explained everything I had been doing, they diagnosed me straight away.

“Over there on your own, you have no family or friends to receive that news. It was the first time then I accepted something was wrong and I just knew I needed help.”

Lennon was diagnosed with anorexia, a condition that over 20 per cent of those who suffer with it develop a long-term or chronic form of the eating disorder. And the 29-year-old is still fighting to this day.

She has become an ambassador for Darkness into Light, while she tackles her own problems head on. Lennon is also a life coach and facing into a TG4 All-Ireland Senior Championship quarter-final against Kerry, she always has a different perspective to take on life and the games within it.

“I came home and started to just go on the recovery journey and I am still on it,” said Lennon.

“It’s something you constantly have to work through. It’s massive, there is not enough awareness around it, especially for athletes. It’s helping to heal me now to play inter-county level because I am in a different place as I have avoided it for a couple of years because (of) all the thoughts, emotions, and belief systems around the eating disorder. But now is the time for me to face them and enjoy sport and to now look to performance.

“We need to start looking at social media too, a lot of the things you see there aren’t real.

“But also, one thing I would love to do is start a campaign where we can help people to openly speak about how they feel. And to learn who you are is not an image or a sportsperson, you are more than that.

“I am on a journey. I went through some of the worst days of my life grieving my dad. But he has put me on a pathway now of wanting to help other people.

“The anorexia is shaping me because it's showing me that it’s just been a coping mechanism from the trauma that I have experienced as a young girl but that now I have the strength to work through it and evolve into who I truly am.”