Following a crazy couple of years for Cavan, the extended summer and the unknown quantity that was the Tailteann Cup has allowed Oisin Kiernan to find fitness and form as the Breffnimen gear up for their big day at Croke Park. Neil Loughran writes… 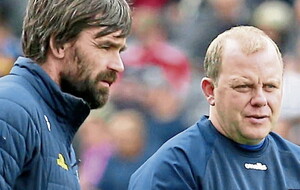 IF the past few years feel like some kind of weird fever dream for the rest of us, imagine trying to make sense of the inexplicable rollercoaster ride Cavan have been on in such a short space of time.

Oisin Kiernan needs little reminding. Indeed, for him, the madness started long before Covid had reared its head when a testicular cancer diagnosis placed football firmly at the back of the queue in terms of priorities.

Even in tough times, though, focus came from what he had to look forward to when all of that was over and done with. Never were there any doubts he would get back.

Having watched from the wings as Castlerahan were crowned county champions in October 2018, his return to Breffni blue came in the second half of a National League game against All-Ireland kingpins Dublin the following March.

Still gaunt and far from peak physical condition, that 20 minute cameo marked the first step on the road back to where he wanted to be.

Fast-forward 20 months and Kiernan was one of the star turns as Cavan surged to an unlikely first Ulster title since 1997, the oddness of that 2020 Championship summed up as tears of joy were cried inside an empty Athletic Grounds, the cold, dark skies of winter hanging overhead.

“But with Covid it was just so strange… it was a new experience for everyone really. That's the way it was and look, our main aim was to win and the celebrations didn't happen but we had no control over that really.”

Still, it didn't quite feel how it was supposed to, not after such a long wait, not to a county for whom football means so much.

And, when a new Covid surge kept last year's campaign in cold storage until May, a truncated League calendar saw justifiable ambitions of pushing out of Division Three end in disaster as a relegation play-off against Wicklow brought the Breffni's worst performance under Mickey Graham.

Division Four, and now in need of another provincial final place to avoid slipping out of the chase for Sam and into an inaugural Tailteann Cup that nobody seemed to know, or care, much about. How had it come to this?

Instead of feeling sorry for themselves, though, Cavan blitzed through the League, earning promotion at the first attempt, then swatted Antrim aside when Championship rolled around, making light of any suggestion the rumblings that led to the ‘Corrigan or nowhere' campaign had come from the men due to cross the white line.

However, defeat to Donegal the next day sealed their fate, two late goals eventually breaking the Breffni spirit. But there was no dissent about the direction in which they were headed. Graham predicted the panel would remain in place and, even as stars from other Ulster counties headed Stateside, Cavan held firm.

“I don't know but I'm sure there were offers to some lads,” says Kiernan.

“I think that just shows the tight group that's there and the environment the management have created.

“We all wanted to row in behind the Tailteann Cup. It's obviously new but we had a chat the next night [after the Donegal game] and we had our aim on going as far as we could in the competition.

“It was a no-brainer really, we just made the decision to give it a lash and see where it takes us.”

The extended summer has also allowed Kiernan to play his part, recovering from the injury that dogged the first half of year – even leaving him wondering whether he would get out on the field at all.

“I suppose that was it.

“It was serious enough at the time. I'm well looked after, I don't know the exact information on what it was but it was a hamstring tendon rupture.

“Originally I thought I was going to need an operation but I had an ACL injury a few years ago on the same leg and from just talking to the surgeon he said there was a chance he could mend it back together without surgery.

“That was what we opted for - it was a small risk at the time - but luckily enough I got back a wee bit sooner than I thought and all has been good since.

And so the shoulder went to the wheel, Cavan seeing off Ulster rivals Down and Fermanagh before sinking Sligo in a kamikaze semi-final at Croke Park to book their place in Saturday's Tailteann Cup decider against Westmeath.

Victory also guarantees an All-Ireland crack next year and - as the Cavan crowds have come out in support throughout their Tailteann Cup run - slowly but surely the competition has assumed a new meaning, despite those initial doubts.

“After going out of Ulster we regrouped, and we put a lot of work in early on in the year. It was great to push on and win a couple of games.

“The Cavan crowd and everyone around us has been getting into it too. The two semi-finals were great games, so I'm really looking forward to getting back up there.

“Westmeath are strong, they've been gaining momentum and putting up high scores…. they're used to playing in Croke Park as well in the Leinster Championship, so it'll be an interesting game.

“We played them in a challenge game or two and there's never much in it. I'm sure it'll be the same again. Our focus now is getting over the line and getting the win.”