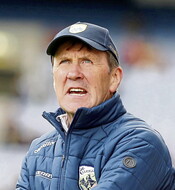 Jack O’Connor admitted the Kerry players had been ‘yearning’ for a cut at Dublin since defeat in the 2019 All-Ireland final. Picture by Philip Walsh

WHOEVER comes out of Saturday’s semi-final showdown between Derry and Galway may move a step closer to ending a long wait for All-Ireland glory – but Ger Brennan believes either his native Dublin or Kerry will spoil the party regardless.

Dessie Farrell’s Dubs take on the Munster aristocrats in Sunday’s other semi-final, an eagerly-anticipated contest fuelled by recent rivalry as much as years of history between the two old foes.

Indeed, in the wake of their last eight win over Mayo last month, Kingdom boss Jack O’Connor admitted the Kerry players have been “yearning to get a cut at the Dubs” since defeat in the 2019 All-Ireland final replay.

Ulster champions Derry and Connacht counterparts Galway, meanwhile, both competed in Division Two of the National League this year, and have been unaccustomed to reaching the latter stages of the All-Ireland Championship in recent decades.

And while both have impressed en route to this stage, former Dublin defender Brennan – who won All-Irelands in 2011 and 2013 – expects the Sam Maguire to ultimately reside with whoever comes out of Sunday’s heavyweight semi-final.

“I know it’s terrible… yes is the answer,” said the St Vincent’s stalwart, speaking at an Electric Ireland event looking ahead to tomorrow's All-Ireland minor final between Galway and Mayo at Dr Hyde Park.

“I would be expecting whoever wins to push on and whoever does win between Galway and Derry, you would say they certainly have a huge advantage from a motivational point of view, that no-one is giving them a chance.

“They have to get over each other first, but I’d certainly fancy that whoever wins between Dublin and Kerry will have too much experience and the skill to get over the line.

“Galway from memory, in nearly all their games this year have been five, six points up and they haven’t been able to close it out.

“While the game against Armagh was a bit of a rollercoaster, with Armagh up and then Galway up, I’d be worried about Galway’s ability if they were to get to the final - or even the semi-final coming up - if they were in the ascendency how many lives do they actually have to be able to hold onto the lead.”

Yet question marks still surround Dublin too, even though they have found another gear after the disappointment of the League when a series of below-par performances saw them relegated from Division One on the final day.

Last year’s All-Ireland semi-final defeat to Mayo put a huge dent in their aura too, sending the six in-a-row champions back to the drawing board as doubts arose over what they had left.

But Brennan believes such talk will have provided extra inspiration as the summer has unfolded.

“There’s nothing like a bit of a target on your back or people talking you down, despite what you have achieved in previous years,” he said

“It actually motivates you and gets you going again. I think that was evident to everybody watching Dublin’s Leinster campaign - Dublin’s performance and execution and energy and work-rate was there to be seen.

“The Cork game was a bit more of a workmanlike performance, they just got the job done, probably knowing they were going to get over the line anyway. They’ll need to reinvigorate themselves and find that bit of form and hunger that they demonstrated in the Leinster campaign in order to get them over the line against Kerry.

“As you guys know from interviewing players over the years - it’s stock answers, fellas try to avoid the media - but with social media, print and televised, broadcast, friends and family, work colleagues, there is no getting away from that negative talk that was probably rightly spoken about during the League campaign based on how lacklustre those performances were.”