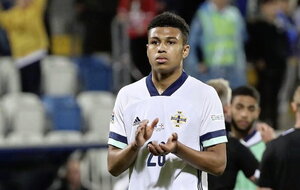 Manchester City's local boy Shea Charles is one of the players who has qualified for Northern Ireland.

HANDLING the double-edged sword inscribed 'eligibility' will be one of the tricky tasks Michael O'Neill has set himself on his return as Northern Ireland manager.

Just a day short of three years since he was appointed Stoke City boss the 53-year-old returned to full-time charge of NI yesterday, knowing that attracting and retaining players will be key to his chances of a successful second spell.

"Eligibility is extremely important," he acknowledged, "there's no doubt about that. You only have to look at some of the emerging nations in the World Cup. Eligibility is used a lot in those squads and they find some great players that way.

"It's important for us to be proactive in that because it's hugely important. It's so difficult for our younger players to break through into the English game and I know Aaron [Hughes, the IFA Technical Director] is looking at alternatives to that.

"I think our domestic league being stronger is a positive and players can stay longer - Trai Hume is a good example of that , being able to step in quite quickly and being in or around Sunderland's first team or in the squad on a consistent basis.

"You're always looking for that player who can make an instant improvement and eligibility provides that."

The downside is that some players, most recently Belfast midfielder Mark Sykes, have opted for the Republic of Ireland:

With Belfast a potential venue to host Euro 2028 games, O'Neill says that working with players in their mid-teens could be vital:

"We did a huge amount of work with Andy [Cousins]. Shea Charles and Isaac Price, that work was done from ages 14 to 16.

"You have to do that and, as an association, if we are going to host a tournament in five years' time, a player who could be playing for us in that tournament might be 14 or 15 now. Just look at Jude Bellingham playing at the World Cup at 19 now, he's phenomenal."