Eight days after becoming the first Belfast man to represent the Republic of Ireland in 76 years, Mark Sykes returned to where it all began. He talks to Neil Loughran… 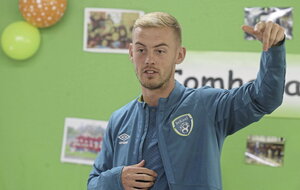 AS Mark Sykes passes through the yard, on the way to a special assembly in his honour, the circle is about to complete.

Not so long ago – at least that’s how it feels - his was one of the eager young faces whose days were filled with fun and football on the same stretch of concrete at Scoil an Droichid, the Irish medium school tucked in off Cooke Street at the bottom of Belfast’s Ormeau Road.

With only a handful of kids around his own age due to the school’s small numbers then, Sykes would regularly be drafted in alongside the big boys. So while valuable lessons were dealt out day and daily in the mobile classrooms dotted around what was once the old UTV car park, the finer points of another language were also honed here.

“You just got used to playing with the older ones - I’d have played with anybody,” he smiles.

“Even when I was 13-14, I used to play in the LORAG down the street. There was a group who worked for the health service, they were 40 or 50 odds probably, I used to turn up after training and play a bit with them.

“I would just play whenever I could, it was constant.”

Yesterday morning, Sykes returned to his old stomping ground, a few streets down from the family home, an example of where hard work and determination can take you. He also returned as a Republic of Ireland international, the first Belfast man since Belfast Celtic legend Jackie Vernon way back in 1946.

A little over two years since Sykes, having represented Northern Ireland at underage level and been on the verge of a senior cap, opted to go with his gut and pledge allegiance to the Republic of Ireland, his debut finally arrived against Malta on Sunday, November 20.

That the eyes of the footballing world were on Qatar and the beginning of the World Cup the same night didn’t matter a jot. Whether it came in a Euro 2024 qualifier or in the latter stages of a low-key friendly win in Ta'Qali, what mattered was that the moment arrived at all.

His parents had been at the Aviva a few days before, hoping to see him strip out against Norway. With last minute flights to Malta hard to come by, they watched on from the comfort of the place where it all began.

“We were sitting in the house,” says dad, Mark sr, “my wife actually got up to walk into the kitchen, then when she came back in he was standing on the sideline, ready to come on... it was a proud moment. An emotional moment.

“Just that sense that… he’s done it.”

That relief was not only felt back in Belfast.

“The first one I went to, I probably thought I was going to play, and then you realise ‘why would I think in that way?’ It’s not only me here, there’s so many players here probably all thinking the same.

“It wasn’t to be, but this time around I felt like, in the build-up to the Malta game, the coaches and the manager were speaking to me, saying I’d been training well, so I got a notion that I was going to play.

“Obviously it’s not something I want to experience just once. You don’t want to make your debut and never be spoken about again. But it’s always down to me – it’ll never be a coach’s decision or a manager’s decision. I feel like a player makes their mind up for them.

“When I came on this time, though, it was just relief, happiness. Pride too of course, but moreso relief that I got myself there.”

And via a road less travelled too. Having ridden out any initial social media storm that followed his decision, Sykes hasn’t had a second thought. Vindication? Not so much. He never saw it in those terms.

“It was a big decision, some people might say it was a risky decision, but in terms of what? In terms of game-time? Or how it made me feel?

“In terms of game-time, yes, because I was basically promised X amount of caps by somebody. But for me it was the right decision to switch… even when I say switched, switching what? As an Irish person, you consider yourself to be able to play for Ireland.

“It’s something that will always be made a big story, but it shouldn’t be. An Irish person who wants to play for Ireland – what’s wrong with it? Coming on against Malta was special because it’s something I’ve been wanting to do, waiting for a chance.

“Sometimes you say it’s just another game, but when you come back to somewhere like the school here, and realise what it means to other people, you feel on top of the world…”

The school, and the family’s connection to it, is a constant reminder of the journey so far too.

Sykes’s sisters were among the first crop to walk through the doors of Scoil an Droichid way back in 1996. With only seven pupils, the school was one classroom then.

Fast forward 26 years, and Scoil an Droichid is waiting to move into a new site near the Ulidia playing fields on the Ormeau Road. Among its 188 pupils is Sykes’s niece Lily, while nephew Tiernan only left last summer.

The shirt Sykes was given for the Norway game was framed, signed and presented to the school yesterday. It will take pride of place in the corridors of their new home.

Indeed, even one of the two jerseys from the Malta game – he kept the one he wore – went to a former pupil of Scoil an Droichid

“A guy called Pearse Crane, he was over in Malta, he’s from not too far away and he goes to a lot of games.

“He was messaging me on Instagram, telling me he was outside the team bus. For someone to come that far, I’m sure it put him out of pocket, I thought it would be a nice thing to do…”

As young necks – Lily’s included - turn towards the door in eager anticipation of his arrival into assembly, Sykes is led through the door by sister Maria, a classroom assistant at the school. Some of those who taught him stand along the sidelines, helping keep the peace among the excited masses.

“I saw a picture on the board in there of me from 2003… I can’t even believe it was that long ago. It’s a nice feeling.

“It makes you realise how far you’ve come.”