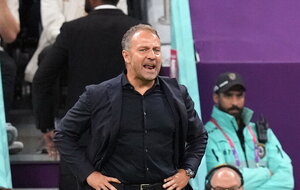 Hansi Flick praised the determination of Niclas Fullkrug after he came off the bench to score an equaliser against Spain and keep Germany’s World Cup hopes alive.

A surprise loss to Japan in their opening Group E game means Flick’s side do not have their destiny in their own hands but a 1-1 draw at Al Bayt Stadium – where Germany hit back after Alvaro Morata had opened the scoring – was a good response.

Only Costa Rica’s late win over Japan earlier in the day gives Germany any chance, but they will have to beat the Central Americans and hope the result in the other game goes their way if they are to avoid group-stage elimination for the second time in succession.

Werder Bremen forward Fullkrug, 29, only made his senior international debut in the week before the World Cup, scoring in a friendly win over Oman.

He became Germany’s oldest outfield debutant in 20 years and Flick was delighted with his contribution against Spain.

“We are very happy that he showed us his determination and how to score goals,” he said. “He gives lots to the team, not only goals, but is also a very good boy, he has his heart in the right place and we are very happy to have him.”

Flick refused to rule out starting Fullkrug in the game against Costa Rica as he aims for the victory that will give Germany hope of getting through.

“We knew what it was all about and what was at stake,” he added.

“Things start to develop when you start to win, so maybe this will give us a boost to have the self-confidence to strike goals.

“We know that this was just the first step and in the next match against Costa Rica we want to create the conditions so we can go through to the round of 16.

“What is important to me is the mentality is there, they showed what they can do on the pitch.”

Luis Enrique turned to Morata early in the second half and he broke the deadlock with a deft finish from Jordi Alba’s low cross just eight minutes later.

“I think we weren’t as fresh and accurate,” Enrique conceded after the game.

“We didn’t play with that much fluidity but then we scored a goal with a great finish from Morata. They had to win and it was a very open match in both boxes and we weren’t as accurate as we needed to be.

“We had to play with more composure. If we start playing different styles the transitions become harder.

“It is a pity, the result, but we have to be happy because we are leaders in this group of death. When the draw came out everyone was surprised by the challenging teams in the same result.”

Asked about Morata’s goal – his second in two games off the bench – Enrique added: “The trouble for me is who is going to be fielded.

“Alvaro is in great form, he had a couple of physical issues, that is why he had to wait to come on in the second half, but he is very fit and you can see the way he finished that chance.”