Time Out: Wallowing in a winter World Cup wonderland 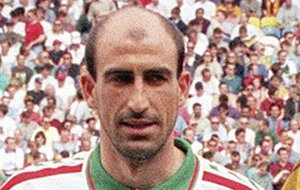 Bulgaria's Yordan Letchkov was an unlikely star of USA '94

YOU know, I think I could get used to winter World Cups. Maybe not in Qatar. Okay, definitely not in Qatar. Or any place really where football is forced to the fringes of conversation due to indiscretions far from the field of play.

But there is something magnificent about rushing up the road from the school run for a 10am kick-off between two heavyweights of the game - Cameroon and Switzerland, take a bow – before settling on the sofa as rain pelts the window and an icy wind howls.

For those lamenting the absence of balmy weather and hazy afternoons spent supping in beer gardens, as though anything other than the union between summer and big football tournaments is just plain wrong, I have news for you. This is pretty much how summer looks too. And spring. And autumn. Let’s not kid ourselves.

No matter when the World Cup takes place, no matter how disengaged you may think you are, it has a way of sucking you in. Currently, a day’s work is managed around marathon sessions of 0-0 draws and 75 minutes injury-time as the trance takes hold.

Conversations with family members become even more half-hearted - quarter-hearted? - than usual, with recent days reminding me of a King of Queens episode when Doug and Carrie are out on a date (like courting, only American).

As they sit across the table from each other, Doug looks longingly into Carrie’s eyes. It’s been a while since they were out together, just the two of them. As she talks, though, there is minimal response.

Leaning forward, this time Doug looks a little too longingly.

“Are you,” says Carrie, pausing in that American sitcom kinda way, “watching the reflection of the game in the whites of my eyes?”

Every World Cup experience is different too, each illuminating a unique chapter in your own existence that somehow manages to crystallise much more detail than the years sandwiched in between.

Italia ’90 is me and dad jumping around the living room of our old house when Packie Bonner palmed away Daniel Timofte’s penalty, then crying in Trabolgan as a short-haired, Jesus to a Child-stubbled Diego Maradona choked back tears when Argentina’s team of violent plodders fell short.

The other night, while Costa Rica were being passed to death by Spain, a friend messaged with an example of just what I’m talking about.

His P5 project - at the time of Italia ’90 - was on the then little-known Caribbean country, shock conquerors of Scotland in Genoa courtesy of Jim Leighton’s biscuit ribs.

“Hard to watch this,” came the text. The streets don’t forget.

USA ’94 was largely spent getting burnt to a crisp in Cyprus, a 13-year-old sharing a room with his parents (would not recommend), sitting in the deserted hotel bar as Yordan Letchkov’s baldy bonce headed Bulgaria beyond defending champions Germany.

By France ’98 drink had entered the equation. Lavery’s (middle bar) featured prominently. I pretended I didn’t mind if England beat Argentina in the second round to try and impress a girl, who wore Three Lions on her chest because she fancied David Beckham and, sadly, not me. I wanted to sweep her legs as she celebrated Michael Owen’s goal. You live and learn.

She’ll not do that again.

Living the student life by the time Korea/Japan rolled around, 2002 was too early. Saipan, yeah. Ronaldo, yeah – 7.30am kick-offs? Behave. Midday lectures were already taking a liberty.

All grown up and with a place of our own, Germany ’06 was spent in that very apartment and – inexplicably – not in Germany as Italy, when they used to go to World Cups, won their last one.

Four years later, we’re getting married. On the opening weekend of the 2010 World Cup, the stag is in Bruges. So are beers of varying percentages, though few below seven if memory serves correct, and there’s every chance it doesn’t.

Brazil 2014 and our first child is on the way – there’s also a child reborn, collecting Panini stickers, swapping already haves with other grown adults, an unsightly mess from beginning to end. Eight years on, Boubacar Barrys are still being found behind the sofa.

A Head and Shoulders bottle bearing Leo Messi’s image becomes an unlikely lucky charm as Argentina go all the way to the final, only for Gonzalo Higuain to do what he does best. Miss.

Russia 2018 heralded the glorious advent of VAR, a time when every penalty query was met with howls of ‘ah no way’. Now, numbed by its pedantry, only those who are paid to care actually do.

The image of Vladimir Putin standing beneath an umbrella before the 2018 World Cup final, shielded from the monsoon conditions in Moscow, churns the stomach that little bit more with every year that passes.

And so, after a pandemic and Putin’s invasion of Ukraine, we find ourselves immersed in the most bizarre World Cup yet. My two kids have an amazing imagination, a huge passion for plenty of things, but sport is not one of them. Not yet, anyway.

This, though, is the first World Cup that has entered their orbit – and it is interesting to experience as a father, rather than the starry-eyed son.

Although he couldn’t care less what is happening in the Middle East, the World Cup is clearly the talk of my six-year-old boy’s classroom. Every day, on the way to and from school, he chirps away in the back, a monologue made from God knows what.

“Daddy, did you record the World Cup for me?”

“No it’s okay… were Man United playing? What about Armagh?”

Wash your mouth out, son.

Aware that Argentina, and Messi, were playing on Tuesday, it was clearly on his mind. He knew I had got a new shirt (£15 off some dodgy wholesaler online - cost of living crisis and all that) and, upon home time, was keen to know how the Albiceleste had got on against everyone’s new favourite brutal regime.

His reaction for those few seconds – crestfallen, face screwed up, head in hands - befits a lifetime’s investment in the cause. Until he realises he doesn’t actually care, eventually spying a leftover crisp on the floor.

The moment is gone but, no matter where or when the World Cup takes place, there will be plenty more in the years ahead.

In search of a World Cup hero: Kylian Mbappé, please stand up

Time Out: Wallowing in a winter World Cup wonderland