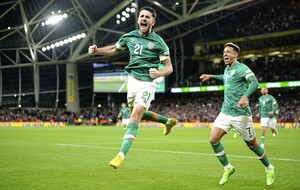 STEPHEN Kenny says his players were too gung-ho in trying to net a third goal against Armenia, which almost cost the Republic of Ireland on Tuesday night, but regarded the overall performance as “very good”.

Far from their best, the Irish squandered a two-goal cushion and were desperately close to suffering Nations League relegation and dropping down to fourth seeds ahead of the Euro 2024 qualification draw in Frankfurt on October 9.

Armenia were Lazarus-like, almost rescuing the game until Robbie Brady slotted home a stoppage-time penalty to win the game 3-2.

Perhaps Kenny wasn’t reading the room in the immediate aftermath or was simply accentuating the positives, always a manager’s prerogative in the face of some stiff criticism.

Asked if he felt the Armenia performance would be good enough to nail a top-two finish in the Euro qualifiers, Kenny said: “Will that performance tonight? I think it was a good performance overall. A very good performance. I think we just shot ourselves in the foot for a few minutes and we have to make sure that doesn't happen again.

“Certainly, everything is in context. We will play better teams than Armenia in our quest to qualify for the European Championships. We will play teams of equal standard and some of less probably as well. It's all relative.

“It was a good performance from a technical point of view and we dominated. There is room for improvement in some of our attacking play and we were uber-aggressive in pursuit of that third goal when we didn't need to be. That was really it.”

Having been in charge for over two years, Kenny’s reign has been one of constant turbulence as he continues to build a new squad that had reached the end of its cycle upon his takeover.

Tuesday night was the Dubliner’s 28th game in charge of the Ireland senior team and the Armenia result was only their third competitive win in 20.

That said, Kenny has had to radically overhaul the squad, introducing 16 new players in 18 months. But the manager acknowledged that the atmosphere in the dressing-room afterwards wasn’t one of euphoria.

“The players were disappointed and it wasn't a euphoric dressing room even though we won 3-2, the players know. How did they end up in that situation when they were absolutely dominant? How did it happen?

“I think it's important that they realise that they actually did a lot of things very well in the game and we must learn from that situation and I expect that they will.”

Kenny did add that his defenders should have sat back and minded the house when they were 2-0 up rather than piling forward in search of a third that left them open to the Armenian counter-attack.

Referring to Nathan Collins, who kept bombing forward, Kenny said: “It's a fine line between a centre half running, dribbling and scoring against the Ukraine beating five or six players and then criticising him for doing it again, but I just think the context of the game when you're winning 2-0 is different.

“All our centre backs, and not just the centre backs, even our wing backs, we were just a bit too eager. We were too advanced on the pitch collectively for a team winning 2-0.

“But, listen, that is not to say we won't continue to attack because we will. That's what we're committed to, we're committed to playing the way we want to play. We made mistakes and ultimately conceded goals but we won the match.”

Euro 2024 qualification runs between March to November 2023 with the possibility of a further, and decidedly convoluted, play-off route available to reach the Germany finals.

This is based on Nations League seedings and will only be relevant from an Irish perspective if Kenny's men don't qualify automatically and the vast majority of higher seeded teams do.