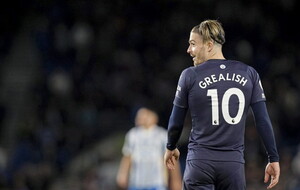 Wolves’ new signing Collins was sent off for his karate kick on Man City’s Grealish in an English Premier League meeting between the sides at the start of the month.

Collins came in for some heavy criticism for his dangerously high tackle on the former Ireland underage player, who later declared for England.

At yesterday’s press conference in the Aviva Stadium ahead of their final Nations League tie against Armenia, Collins said: “It was a mistimed tackle.

“I was outside the dressing room talking to someone and I saw him [Grealish]. I spoke to him and said: 'Listen, in the tackle, I didn't mean to go for you, I went for the ball and meant nothing by it'.

"He said: 'Yes, it's not a problem, I didn't think you did'. It was sound, we just chatted and we were both on good terms.”

Collins, who is still only 21 and in the early throes of his senior international career, added: “It happens. Mistimed tackle - red card. You’ve got to get on with life.

“If I’ve a long career, you’ll have ups and downs. I’ve come into camp and all the lads were great. Seamie [Coleman] was a good help, ‘Macker’ (James McClean) was a good help.

Despite Ireland’s mixed showing in their Nations League campaign that concludes in the capital tonight, Collins has used the games as his platform to become a regular in Stephen Kenny’s side.

The manager went with Collins, John Egan and Dara O’Shea as his three-pronged central defence in last Saturday’s 2-1 loss to Scotland at Hampden Park, with Shane Duffy paying the price for his lack of game-time at club level.

And while the Kildare native acknowledges results could have been better in the Nations League – the Irish have scored just one victory in five outings - the performances bode well for next year’s Euro 2024 qualifiers.

“There are two ways of looking at the campaign,” he said.

“You can look at results and think we could have done a lot better but then you can look at performances and say, maybe one game [Armenia, away], we haven’t been at it but in most games we’ve been involved, we’ve nearly been the better team, we’ve had chances and we’ve defended well.

“It’s whatever way you want to look at it but, from my perspective, as a team, you can see every game that we’re getting better.

“Every game, we’re growing as a unit, players are coming in and causing other players to lose their spot because the standard of the team is really good. I think to have that in a team at this level is crucial and the longer it continues and the squad settles I think it will be really good.”