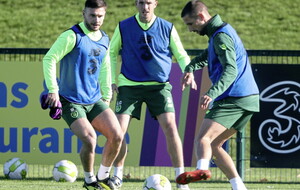 THE Republic of Ireland have to go all-in against top dogs Scotland at Hampden tomorrow night as they gather themselves for the grandstand finish that could yet see them top their Nations League group.

To do that they need to win their two remaining games - in Glasgow tomorrow night and against Armenia at the Aviva next Tuesday - and hope Ukraine drop points against Armenia and then draw against Scotland in their final fixture. That scenario would mean Ireland and Scotland finishing joint top and, because of their 3-0 win in Dublin in June, Ireland would top the group on head-to-head.

There is a lot of football to be played but everything hinges on beating Scotland who returned to form with a 3-0 win against Ukraine on Wednesday night. That will require goals and the good news for the Boys in Green is that Scott Hogan has been among them recently for Birmingham City. The former Aston Villa striker cracked in a hat-trick (his first for five years) against West Brom in the last game before this international window so he is in fine form and hoping to start against the Scots.

“Obviously I want to start but I can't feel hard done by (if I don't),” he said yesterday.

“I just have to keep working. If I do play or come on or whatever I've got to try and do something but I think whoever is playing, there is real potential for goals.”

Goals are the lifeblood of all strikers and tomorrow night would be the perfect time and place for 30-year-old Hogan, who started up front alongside Troy Parrot in Ireland's last group game, to break his international duck after 11 scoreless appearances.

"You are judged on goals and I failed in that aspect in the past few years,” he admits.

“For club and country I feel in a happy place and it's the first time that I feel happy in a number of years.

"I feel happy playing my football, I enjoy going in so in terms of peaking, I hope not. We always want to keep going and to get better. I'm 30 now and around this time you generally peak, they say, but I'm hoping that I keep going. I look after myself and hopefully this is just the start."

Republic boss Kenny cannot be faulted for his man-management skills. Players routinely mention that he is in regular contact with them and Hogan spoke to his manager on the way to the Hawthorns before he scored his recent hat-trick.

“He texted me on the way [to the match] and I rang him back, I just had a brief chance,” he explained.

“Obviously Dara [O'Shea] was captaining West Brom so there was a bit of banter on the phone about that. He did say: ‘Don't go around kicking him, just take the one goal, I don't want his confidence going!' I ended up scoring three so… But he does ring up and go through his process with you so you understand what his thinking is.”

The Republic have played three times at Hampden Park and won twice. Joe Haverty scored Ireland's only goal in a 4-1 loss at the Glasgow Mecca in 1961 but Mark Lawrenson got the winner in a Euro 1988 qualifier and Mick McCarthy's team won a friendly 2-0 in 2003.

Hogan detects a confidence in the Republic squad who left for Scotland yesterday. After their 3-0 victory over Steve Clarke's men at the Aviva in June they have to be optimistic of another victory.

“I've been part of squads, successful team with huge players for the country who have been phenomenal,” said Hogan.

“There are a lot of younger lads in the group, fresh energy in and around the place. Everyone is close, it is enjoyable to come in. There are groups here and there within the hotel that stick together but everyone comes together at the end of the day.

“It feels like a youthful energy. There are lads who have played all the way up the age groups, the U21s, so it is a really enjoyable environment. There is positivity from everywhere and that can only stand us in good stead.”