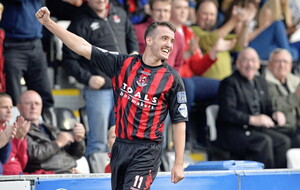 CRUSADERS manager Stephen Baxter has embraced all the technological advances in local football over the last number of seasons – but says he would take a player’s desire over any other measurement of performance.

The Irish Cup holders are riding high in the early throes of this season, sitting in third spot after six games, and will hope to compound Ballymena United’s misery as David Jeffrey tries to arrest a worrying losing streak.

Baxter has won every honour in the local game since taking charge of the Crues back in 2005 and has rolled with all the different trends of local football.

“I’d say the biggest change in local football has been the technology side of things – the GPS tracking systems and the like – and thankfully I’m au fait with it all now.

“The game has moved on so much over the last four or five years, it’s far more professional.

“We’ve had time to work with the various bits of technology and you have to roll with all of that. We, as coaches and managers, had to very quickly get up to speed with it all because all of these young players that go across the water are all used to it – getting breakfast and lunch at their football clubs, getting their strength and conditioning and all the technical stuff being up on televisions and even down to the tablets that we use. There is so much going on in the game.”

Baxter added: “It’s the modern way. But the grass never changes, the white lines don’t change, the goals haven’t changed their position and you still have to keep the ball out of one net and get it in the other net.

“They say you’re always looking for the extra five or 10 per cent, which all of these things are meant to be giving you, but give me a Josh Robinson, give me the player that will give you everything over players who want to draw on how far they’ve run. I don’t disagree with all of this stuff and it all has to be worked in, that’s what the new breed of player needs, but nothing beats the hard focus, determination and effort that you need to be the best that you can get to.”

Robinson was a fitting example of what Baxter likes in a player. The Crusaders central defender underwent facial surgery on Wednesday having suffered a badly damaged cheekbone injury during last Friday night’s win over Linfield.

Meanwhile, Ballymena United boss David Jeffrey appeared to cast doubt over his ability to turn the club’s fortunes around following a four-game losing run in the Premiership.

After suffering a 1-0 home defeat to Carrick Rangers, Jeffrey’s mood was sombre in his post-match briefings. But Baxter has absolute faith in the experienced Irish League boss to transform the Braidmen’s fortunes.

“When your team loses three or four games, you self-analyse – even if you lose one game. You’re always looking to try and break a match down and where you could do something better. That’s normal for all of us football managers. There is no better man than David Jeffrey to sit down and critique everything what’s going on at Ballymena. Three or four games doesn’t make or break anybody’s season.

“I don’t think his team played that badly,” added Baxter. “I watched the game back. It’s probably all about the result but he’ll quickly have worked that out. Tomorrow is a brand new game for them.”