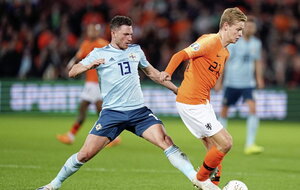 FOOTBALL is full of twists and turns and the departure of Corry Evans's club manager cost his previous international boss his job.

Stoke City recently replaced Michael O'Neill with Alex Neil from Sunderland and Evans harked back to the early stages of O'Neill's Northern Ireland reign as a warning to those calling for his successor, Ian Baraclough, to be sacked.

NI have struggled recently, winless in their last five matches, with their last victory in a friendly against Luxembourg, and only two draws - both against Cyprus – from their four Nations League matches in this campaign.

Yet Evans, now 32, pointed out that patience is required: "You go back to Michael's era and the first lot of games we didn't really win a lot of football matches. I think it took time to find our feet.

"Once we got that first win away, in Hungary I think it was, from then on the confidence and the belief of the team just grew and just sort of snowballed.

"We went on this great run and managed to get to the Euros, which was something a lot of us probably never thought was even possible at that stage, at the start of that campaign.

"It just goes to show a couple of wins and your belief and your confidence just grows and who knows where it can take you."

The first chance of victory comes tomorrow evening at home to Kosovo, before a trip to group leaders Greece on Tuesday; both of those team recorded one-goal victories in the reverse fixtures.

Kosovo won 3-2 in June, then Cyprus came to Windsor Park and led 2-0 befoere the hosts battled back to earn a point. Evans missed both those matches due to club and then family commitments but saw enough to believe there's something to build on:

"I think it's important, the two late goals in the comeback, so we've still got that as a squad that we want to stay in games and we'll keep going right till the end."

Evans draws parallels too between club and country, with Sunderland on the way up after promotion from League One earlier this year – but taking things slowly, even with the Premier League as a longer-term target:

"The chairman's come in, he's not stupid to think that we're gonna get there within a year or two, he's got a plan in place, and he wants to do it progressively. You can see that with the way last season and this season have gone, we're buying young players and we're developing them and we're growing together as a team. I think the longer we spend together the better we'll become as a team.

"It's important as well, the fans have been great with us. It's important that they stay with us and try and guide us through this season and see where we can end up."

There have been boos from some of the NI fans at recent results, but Evans feels that might represent an over-reaction: "Maybe so. We haven't really won as many games as we would have liked over a number of games now so I can understand the frustration that the fans have at the minute.

"But we're also developing young players and it's a squad in transition. I'm sure the manager knew that when he was taking on the squad, that he had to bring in his own players and create his own identity."

Asked for his message to those who want 'Bara' to go, he replied: "Quite simple - we'll give our all. Obviously the results and performances weren't all that in the summer - I can't comment too much because I wasn't there. - but we always give our all as a squad and hopefully we can give them something to cheer about on the weekend."

The Evans family might have something to celebrate anyway, with Corry's older brother Jonny two caps away from a century of senior international appearances.

Corry will be delighted to see the Leicester City centre half reach that landmark: "It would be great for him. I think he has been looking at that sort of number for a while now and I am sure he would have liked to have hit it a lot sooner.

"It's a great target to reach and hopefully he can continue to get many more caps in the future. He is a big player for the country, and as a family as a whole it is great as well that he is recognised as one of the most-capped players in the nation."

Most imporyantly, though, both Evans will want to get a win for Northern Ireland against Kosovo, aware that players must take responsibility for results too:

"Yeah, I think we know all that. Obviously the manager, if it's club or international football, when results don't go your way then he is the man who comes under pressure.

"But I think players feel it as well. We have to share the responsibility because we are the ones on the pitch and putting in the performances. Hopefully we can get a win on Saturday and make the mood a bit lighter within the squad."