Republic of Ireland on a mission for win at Hampden Park 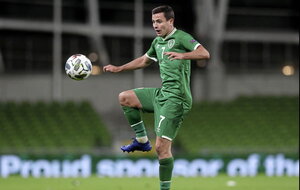 Josh Cullen has won 20 caps for the Republic of Ireland

SCOTLAND’S 3-0 win against Ukraine on Wednesday night blew Nations League B Group One wide open and the Republic of Ireland will be right back in the mix if they can beat the Scots at Hampden Park tomorrow night.

Transformed from the disinterested outfit that was well beaten by the Republic in Dublin back in June, Steve Clarke’s men leapfrogged Ukraine thanks to goals from John McGinn and a Lyndon Dykes double.

Josh Cullen, who played as a holding midfielder in the 3-0 win over Scotland just three months, ago was impressed with Scotland’s return to form but he says the Republic are “hungry to go and get another result”.

“If they see it as a revenge mission or however they view the game, we’re just as determined to go there and get another three points and put in another good performance,” said the Burnley midfielder.

“Wednesday night was a good result from them and their performance was obviously full of energy and it was a good win but Saturday is a new day and we have to be confident and full of belief that we can get a good result.

“We can't read too much into what happened in the summer. Obviously we take the positives and belief from it but it's a new day and a new game. We've had a good week to prepare and we're looking forward to the game now and we want to put in a good performance and try get a positive result.”

The Republic’s goals in June came from Alan Browne, Troy Parrot and, in the second half, a piledriver from Michael Obafemi. Right across the pitch there were signs of a team playing with increasing confidence that is leaving the horror start to Stephen Kenny’s tenure as Ireland manager behind.

“We can take the belief as a team that we have scored goals against them and we'll be looking to do that again, different types of goals, but all over the pitch we were full of energy and won individual battles again,” said Cullen.

“We still looked at the game and areas where we can improve so we’re not getting carried away that we won 3-0 and everything is going to be fine. There were areas of that game that we sat down and analysed as a team where we can improve as well and working on that this week.

“I’m sure the same goes for Scotland, I’m sure they’ll review their game (against Ukraine) that they won 3-0 and look at areas where they can improve. That’s the nature of the game now and analysis - you just take the confidence from winning games and there are areas to improve and we’ll look to do that coming into the game on Saturday.”

Vincent Kompany brought Cullen to Anderlecht in 2020 and the former Belgium skipper signed him for the second time when he took over as manager of Burnley. Essex-born Cullen has been an ever-present so far for the in-form Clarets who are fourth in the Championship.

“It has helped that I'm playing under the same manager and we're trying to implement the same style that I was used to at Anderlecht under him,” he said.

“I am enjoying my football and credit to the lads at Burnley, it has been a change in style to what they are used to and we have done well to get to where we are at the minute but we know there is a lot of room for improvement to keep working and developing as a team and hopefully that continues as the season goes along.”

Republic of Ireland on a mission for win at Hampden Park