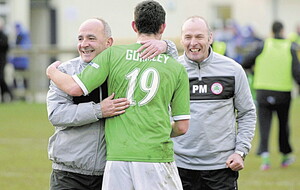 Tommy Breslin embraces Joe Gormley. The pair were a match made in heaven

MARSHALL Gillespie is the biggest nerd you’ll find on Twitter. Nerdish in an absolutely brilliant way.

Marshall specialises in local football. Any time he throws up a stat on his social media page you can bank on two things: it’s correct and informative.

He should start charging for his stats and research on Irish League footballers as so many plagiarise his fine work and pass it off as their own.

During the week, he informed his 9,000-plus followers that Joe Gormley had just recorded his 400th appearance for Cliftonville. The tributes flooded in.

For Joe, I’m sure it’s nice to read the heartfelt messages and worthy praise of his astonishing career. Marshall told us that during those 400 matches for his beloved Reds, the Ardoyne man made 315 starts, 85 substitute appearances, he’s scored a wonderful 245 goals, 13 hat-tricks and 84 assists.

Those are awesome stats.

But when you’re reading the tributes, I’m sure Joe realises that when you amass that number of appearances you’re firmly in the autumnal stage of your career.

Joe Gormley is a romantic novel in itself. He was scoring bucket loads of goals for local Amateur League side Crumlin Star under Eamonn Hawkins, a former Irish League player himself.

Like a lot of people, though, you doubted if this kid from Ardoyne could do it at a much higher level.

It was okay scoring four and five goals against Islandmagee and Dumurry YM – but against Linfield, Crusaders and Coleraine? That was an entirely different scenario.

But Hawkins was a canny judge of player. He’d seen enough in the gangly striker to suggest that he would make the grade in the Irish League.

He also joked that he wouldn’t score many headers. Headed goals, Joe would confess himself, weren’t his speciality.

Interestingly, Marshall doesn’t give the breakdown of Joe’s headed goals.

Without doubt, the late Tommy Breslin was the best manager Joe Gormley ever had. I knew Tommy quite well.

I never believed he would go into management. Cliftonville were glad he did.

What I overlooked in Tommy was his people skills. And yet, beyond the dry wit and one-liners, ‘Bressy’ was a terribly shy man. But being shy, in some inadvertent way, enabled Tommy to understand people.

Tommy had a great football brain, which was easily discernible on the football field, but it was his deep emotional intelligence that made him a brilliant manager. He knew he was blessed with a fantastic group of players and they absolutely suited his light-touch coaching style.

After all, what was he going to tell Liam Boyce and Joe Gormley before a game? He gave them their respective jerseys and told them to go out and entertain the supporters.

Tommy once told me that Joe wasn’t the type of player that responded to rockets. If anything, he’d go into his shell.

If he was suffering a loss of confidence – as all strikers do at some point or other – Tommy would put his arm around him, remind him what he was good at and the rest flowed from there.

Joe rarely lost form when he played under Tommy.

He mightn’t have been the best header of a ball, but he had everything else. He was deceptively quick, a very clean striker of the ball, good work-rate, could bring others into play, rarely lost his cool and you couldn’t intimidate him.

And he was - is - brilliant in one-v-one situations.

An interesting debate unfolded on Match of the Day recently when host Gary Lineker insisted that scoring goals inside the penalty area - something he made a career out of - wasn’t an innate skill and that it could be completely learned.

Guest Danny Murphy begged to differ and said Lineker was selling his own career short. Lineker argued that if a player was told to run into certain areas often enough, they would score goals.

Perhaps the former England international had a point. But there are a lot of things a striker has that you can't replicate or coach. For instance, that moment when a striker knows he's in the clear and has only the goalkeeper to beat.

In those moments, everything is about temperament. It's having the unerring ability to think clearer than the goalkeeper and being able to somehow slow the moment down, utilising every millisecond in your favour.

Every time Joe Gormley goes through on goal, I expect the ball to finish in the net. But, of course, as much as we’d like them to sometimes, nothing stays the same in football.

He’ll celebrate his 33rd birthday in November and is no longer an automatic starter for the Reds. Paddy McLaughlin has other options in attack these days. Ryan Curran was a slow burner of a signing back in 2018 but has evolved into a classy striker for Cliftonville.

And I recall watching a highlights reel of Ronan Hale’s goals when he played underage level for Birmingham City and being mesmerised by the quality and different types of finishes.

Of course, depending on the required skill set you need for different positions on the pitch, ask any player and the vast majority will say that they are a better version of themselves at 33 than, say, 23.

As with all these things, it usually comes down to the manager's choice and right now Paddy McLaughlin has some strong options of which Joe Gormley remains one.

But it's doubtful those who follow in the footsteps of the affable and bashful Ardoyne man will get anywhere near his numbers. To be on 400 games and still going strong is a staggering achievement.

For those who’ve had the pleasure of watching Joe Gormley, we’ve known for quite some time that there’s a goal-scoring legend in our midst.