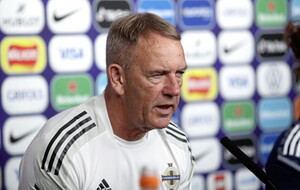 KENNY Shiels ruefully joked that the only stroke of good luck he enjoyed at Euro 2022 was the fact that new call-up Ellie Mason hails from Southampton.

The Northern Ireland Women's team manager was therefore able to meet the 26-year-old during the tournament and persuade her to switch international allegiance – not from her native England but from Gibraltar, for whom she made two appearances earlier this year.

Eligible for NI through her maternal grandfather from Ballymena, Mason plays midfield for Lewes but Shiels sees her as a future central defender on the international scene.

The retirement of Ashley Hutton weakens that area, while Julie Nelson is 37 and Sarah McFadden 35, although the latter was excellent at the Euros and has gone full-time with Durham Women's FC for this forthcoming club season.

It might appear that Shiels stepped on a black cat while walking under a ladder as record goal-scorer Rachel Furness unexpectedly announced her decision to step away from the international scene on Thursday. On top of striker Simone Magill having suffered a cruciate knee ligament injury in the first match of the Euros, that appears to leave NI weak up front.

Yet while Shiels quite rightly praised the influence Furness has had on the team's rise in recent years, he also accurately noted that she has not been the stand-out player in recent times.

Indeed, an enduring image of the qualification for the Euros is of ‘Furny' gleefully celebrating at Seaview – on crutches, having been injured in the away leg of the play-off.

“I think we did well without her,” said Shiels. “People forget when we qualified, she didn't play in the Ukraine game, the full game at home, and 75 minutes in Ukraine. We've experienced that because she's a very influential player, verbally, vocally, and on the pitch, she inspires people.

“It's something that we have to adapt to, we've already had that experience of adapting to it. But we got her in the finals, she played the three games, we nursed her into that, and I'm sure she'll respect that.”

Somewhat surprisingly, Furness did not initially inform Shiel of her decision by speaking to him, although he did not make an issue of that: “Rachel sent me an email, just to say that she wasn't able to play for personal reasons. I rang her back, she was unavailable, but she rang me back and we had a wee chat about it. She didn't give any details, just said that it was for personal reasons.”

Back in the English Women's Super League with Liverpool Women FC, Furness clearly had fitness issues at the Euros, so may be focusing on her club career given that these next two qualifiers are not majorly important.

Whether or not she does return with NI, though, Shiels is planning for the future, even if he can't foresee it.

Mason, who had spells with Watford (twice), Chelsea, Millwall Lionesses, Yeovil Town and London City Lionesses before signing for Lewes last summer, is one who could step straight into the first team, perhaps in midfield. The other six in the squad in that department are all home-based, three with Glentoran Women and three with Cliftonville Ladies, including captain Marissa Callaghan.

Goalkeeper Jackie Burns and wide attacker Lauren Wade earned moves to Reading Women after impressing at the Euros, but young goalkeeper Lilie Crooks Woods of Mid Ulster Ladies is a promising prospect, able to play out from the back as Shiels likes to do.

“Lilie was a defender, playing in defence, we happened to see her just weeks after she'd been transferred into a goalkeeper by Mid Ulster.

“In the last two-and-a-half years [goalkeeping coach] Dwayne Nelson has worked really hard with her on the training ground and she's came on so much. She's not ready to challenge for the number one position but in the event of injuries I wouldn't be afraid to throw her in.”

NI Women play Luxembourg on Friday September 2 at Stade Émile Mayrisch in Esch-sur-Alzette, then travel to face Latvia at the Daugava National Stadium in Riga on Tuesday September 6, having won both the reverse fixtures 4-0.

NI Women's squad for World Cup qualifiers away against Luxembourg and Latvia: