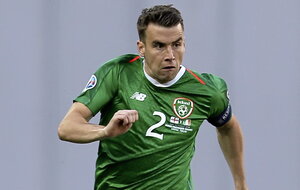 Seamus Coleman is hoping to make his return to action against Nottingham Forest this weekend, with the Republic of Ireland's next outing against Scotland on September 24. Picture by PA

REPUBLIC of Ireland captain Seamus Coleman insists players have learned to “blank out the noise” amid the topsy-turvy reactions that have followed results under Stephen Kenny.

The former Dundalk boss is approaching two years at the helm, having taken charge of his first game in September 2020 - a 1-1 draw with Bulgaria.

However, although Kenny has introduced a new passing style, as well as showing faith in a crop of exciting youngsters, the jury still appears to be out.

The pressure cranked up at the start of June following back-to-back defeats against Armenia and Ukraine, only for an impressive 3-0 demolition of Scotland and a subsequent 1-1 draw with Ukraine to turn the tide once more.

And experienced campaigner Coleman, who made his international debut 11 years ago, says players can’t pay too much heed to the whims of the public mood.

“The group is happy, the group is eager to learn from the manager. When the results are good and we play well, it’s very satisfying, and there’s been a few results of course that we’re very disappointed in, ones where – as players – we should have done a lot better.

“When you’re manager of a national team, you’re always going to be under that scrutiny from game to game. You see over here with England, it happens at that level. It’s just about blanking out the noise and believing in what you do really.

“As players, we don’t really pay much attention to it.”

The Killybegs man is currently biding his time in the hope of a return to the Everton starting line-up, after surgery on a groin injury during the summer left him playing catch-up heading into the new campaign.

Coleman was on the bench for the Toffees’ defeat to Aston Villa last weekend, and is hoping to feature against Nottingham Forest on Saturday – with the Republic’s September 24 date with Scotland also on his radar.

“I'm alright,” he said, “it's not ideal timing with pre-season and things like that, but I was hanging on there for the last five or six games of the [last] Premier League season, going without any rest.

“It was a tough end to the season for us and I had to play as much as I possibly could. I thought I would be fit to go and play in the Ireland games as I hadn't had a week off in a while but as soon as I went with Ireland I could feel it niggling again and I had to have a procedure done, which I knew would the case.

“I was disappointed to miss the Ireland games as they are massive for me but at this moment in time the pain is gone and I am building up fitness.

“I missed the first game of the season and was on the bench last week, so I'm ready when called on - I feel good and feel fit.”

With boss Frank Lampard under increased scrutiny after a slow start to the season, having narrowly avoided relegation back in May, Coleman knows Everton must click into gear fast – and he believes they have the personnel to do just that.

“It's important not to hold onto any hangover from last season and just judge the two games on what they were.

“I'm sure we are probably trying to get some players in but there is a good feel around the place - we brought in some good lads as well, good leaders and characters in Conor Coady and James Tarkowski.

“Going into this season, to be completely honest we have to be better than last season and that is very obvious. But the Premier League has got so competitive and every game is a battle to get three points so you have respect the league you are in and we have to make sure we're doing the right things daily here to make sure we're not in that position.”