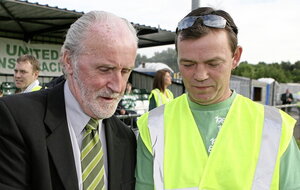 Former Celtic stalwart Danny McGrain will be involved in managing a Celtic legends side in Warrenpoint. Picture by Declan Roughan

A STAR-STUDDED Celtic select are to light up Warrenpoint’s Milltown stadium as part of a major fundraiser for the Kevin Bell Repatriation Trust on August 27.

The Bhoys legends will play reigning Carnbane League champions Cleary Celtic – who boast former Down GAA star Benny Coulter among their number – in the first half, before taking on a select team from Erin Go Bragh, the biggest Celtic supporters’ club outside of Glasgow, in the second 45.

After the game, a meet and greet will take place at the Duke Bar in Warrenpoint, with a limited number granted the opportunity to meet their heroes, before an evening function at the Canal Court Hotel in Newry, with two-time Olympic bronze medallist Paddy Barnes among the special guests.

In recognition for the amazing work he and wife Eithne have done since establishing the repatriation trust following the loss of 26-year-old son Kevin in 2013, Collie Bell will lead out the Celtic legends side before kicking the game off.

“Collie’s a Celtic man,” says organiser Colm McAlinden, “so he’s absolutely blown away by that.”

Managing the Celtic legends side, meanwhile, will be Marty Lynch.

Last month GAA legends came together at Jack Mackin Park in Newry to support the well-known Newry man in his battle with Motor Neurone Disease.

Lynch was the Down captain when the county won the Ulster U21 Championship in 1984 and played for the county senior team with great distinction until 1988, appearing in the 1986 Ulster final against Tyrone.

He also played on the St John Bosco team which won the 1996 Down intermediate championship and, since his diagnosis, has worked to raise awareness of the condition.

Teams representing Down, Armagh and Ulster, as well as the four clubs in Newry - Bosco, Shamrocks, Ballyholland and Mitchel's - took part in a Legends4Lyncho event on July 30.