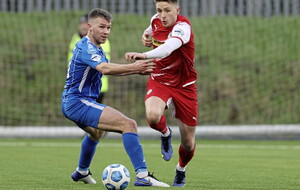 Ryan Curran pulled a goal back for Cliftonville

CLIFTONVILLE may have been unbeaten on an Irish League opening afternoon since 1998, but they will have earmarked Saturday's trip to the Showgrounds to take on Coleraine as presenting a particularly tricky curtain raiser. And so it proved for the Reds.

Paddy McLaughlin's men began their season more than a month ago, when they took on Slovakian opposition in a qualifier for the Europa Conference League, but it was Coleraine who were the sharper side at the Showgrounds.

Evan McLaughlin made a dream debut for the Bannsiders, striking twice in the first-half to give them what turned out to be an unassailable lead. The former Derry City player grabbed his first just after the half-hour mark when he timed his run to perfection to touch home a Josh Carson cross.

And he doubled Coleraine's advantage nine minutes later with a fine solo effort, picking the ball up midway inside the Cliftonville half and racing into the penalty area to slot past new 'keeper Fynn Talley.

Last season's league runners-up fought their way back into the game after half-time when Ryan Curran converted a powerful header from a Levi Ives cross. Ronan Hale hit the crossbar shortly after as the Reds went in search of an equaliser, but Coleraine always looked at least as much of a threat, hitting the woodwork twice in as many minutes through Dean Jarvis and Matthew Shevlin.

And it was the hosts who got the game's fourth goal when Jamie Glackin wrong footed Talley with a long range effort in injury-time to confirm the victory.

Reds boss McLaughlin was in no mood for mincing his words on the final whistle and admitted his side deserved to take nothing from the game.

“We've had so many individual errors throughout, but we have to learn a harsh lesson and bounce back from it next week,” McLaughlin said.

“Coleraine deserved the win and we didn't deserve anything from the game. We pulled the game back at 2-1 and we pushed for an equaliser, which is probably something you wouldn't have expected after watching the first half-hour.

“After Ronan hit the crossbar, I thought we might have got an equaliser, but another error at the end seals the game for them.”

While McLaughlin was loath to be too critical of his players after just a single league game, the Derry man also insisted there could be no dwelling on the successes of last season.

“We don't like going in too deep on our boys after one game,” he added.

Yesterday afternoon, the men who pipped Cliftonville to last season's title picked up where they left off in May dismissing Portadown 4-0 at Windsor Park. The Blues took just six minutes to open their account, Kirk Millar firing low into the bottom corner with the help of Portadown defender Paddy McNally's foot.

It took Linfield until 57 minutes to double their lead, Ethan Devine hooking home from a cross. On 72 minutes, it was three when Eetu Vertainen converted a headed cross from Devine. The home side completed the scoring when Andrew Clarke tapped in from a late corner.

Elsewhere on Saturday, Crusaders started their season with a bang thanks to a 5-1 victory over Dungannon Swifts at Seaview. Ben Kennedy scored a hat-trick for Stephen Baxter's side while Paul Heatley bagged a brace.

At the Showgrounds, nine-men Glenavon came back from 2-0 down to rescue a point. Paul McElroy and Jordan Gibson had put Ballymena two up in the first-half before Peter Campbell pulled one back on the stroke of half-time. Glenavon then had Eoin Bradley and Andrew Doyle sent off after the break before Aaron Prendergast grabbed an unlikely injury-time equaliser for Gary Hamilton's side.